The Aspen Hall of Fame was established in 1986–87 to recognize and honor those individuals who have had a significant and lasting impact on the Aspen/Snowmass communities—economically, physically, spiritually, ethically or intellectually. Nominees must have demonstrated inspirational leadership and have made major contributions to cultural, sports, and/or civic activities.

The first Hall of Fame committee represented a cross-section of the community, including representatives from the arts council and the historical society, from the ski club and the ski company, as well as 10th Mountain Division soldiers; there was even a member of the first board of directors of the Aspen Corporation, the original name of the ASC. The first banquet was held during the Aspen Skiing Company’s 40th Anniversary Celebration week in January 1987.

The current organization has operated independently of ASC for many years. Each year’s banquet features an awards presentation, introduced by a video profiling the life of each inductee.  Please note that due to the COVID-19 pandemic, the Aspen Hall of Fame banquet will not be held in 2021 for the first time in the organization’s 34-year history.

Audio recordings by Aspen’s public radio station, KAJX, of the history of the Aspen Hall of Fame may be accessed by clicking here:
Session 1 · Session 2 · Session 3 · Session 4

2019 inductees and past inductees who attended 2019 banquet 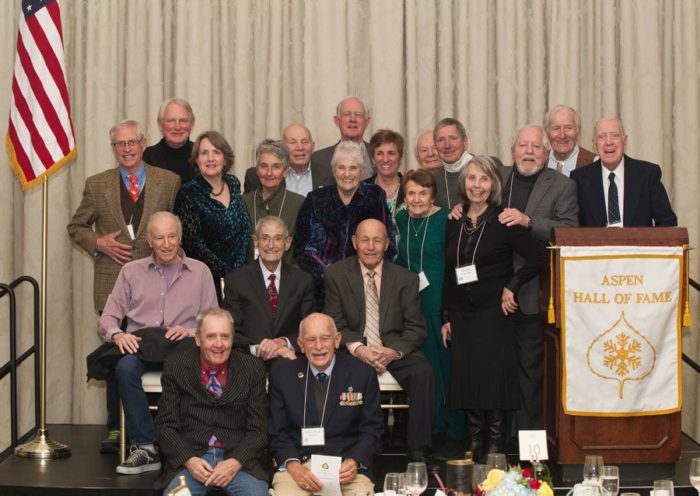 2017 inductees and past inductees who attended 2017 banquet