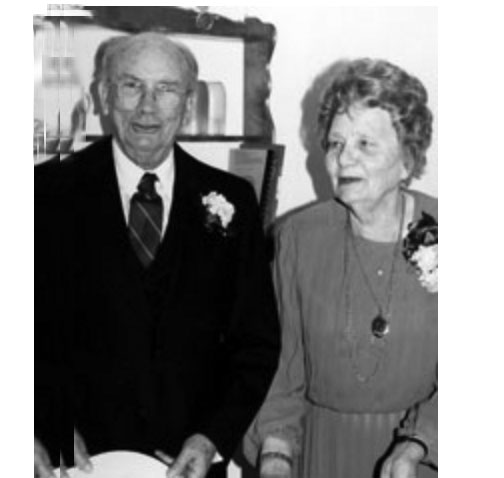 Alberta  was born in Longmont, Colorado, in 1914, daughter of Swedish immigrants.  The family raised alfalfa, wheat, sugar beets and prized cattle. Alberta  took a job at the local Woolworths store where she met Jim in 1936. Jim worked with his father at the family’s barber shop down the block from the Woolworths.  The couple began dating, and when Jim was given the opportunity by Lawrence Elisha to run the barber shop at the Hotel Jerome in Aspen, they married on December 29, 1936, and immediately moved to Aspen. Alberta recalls waking up the next morning and looking out the window from her third floor room in the Hotel Jerome—seeing the broken down buildings and unpaved streets, she told Jim, “I’m only staying five years in this dump!”  She never did leave and died in her own home on Maroon Creek.

Alberta and Jim had three children—Sally, Jane, and Tom—who grew up ski racing. Jim was a founding member of the Aspen Ski Club in 1938 before the chairlifts were installed.  Jim volunteered his time with the ski club to drive to ski racing events, act as timer and raise money for the kids’ uniforms.

Jim knew that he needed to do more than run a barber shop to support his family, so he started a real estate business, the first one in Aspen.  They bought what is now the Monarch Building on Main Street which then was Moore’s Court, a motel.  Jim also had a barber shop and a real estate office in the building. They also lived in the building until 1955. It was difficult to close deals because many of the houses had no clear chain of title, having been abandoned.  It was also difficult to obtain mortgages since the only bank in town, the Bank of Aspen, had seen so many loans default.  Jim solved this problem by enlisting the help of down valley ranchers who had some surplus cash to loan.

Alberta and Jim were very involved with the community.  Alberta began volunteering at the Thrift Shop in 1951 and continued for over 45 years working every other Thursday.  She also was very involved with Aspen’s Literary Club which she joined in 1952. This was a small group of local women and one of the oldest organizations in Aspen (and still is).  Alberta worked hard keeping up Moore’s Court in those early days. Very few ladies worked as hard as she did!

Jim was a member of the Aspen Elks Lodge and served as Exalted Ruler two years running in 1948 and 1949.  Jim was also on the Aspen School Board for years in the early to mid-50s. When the couple realized that the schools were over crowded, they donated land near Aspen Highlands for a new high  school campus to be built on Maroon Creek in 1966.  They also felt that the community needed a new public swimming pool and donated 3 acres for the facility in 1972. This was named the James E. Moore Swimming Pool and is now part of the Aspen Recreation Center.