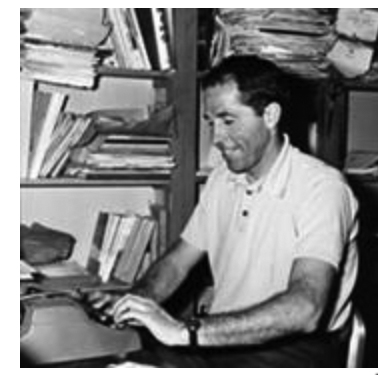 From the Alps to the ocean, from the Himalayas to Aspen, Dunaway was almost too busy for just one life. Always adventuresome and a born raconteur, he had great stories to tell.

Even his beginnings were exotic. He was born in 1923 in Persia (present-day Iran), to a Lebanese-American mother and an economist father from Missouri, who was on an economic mission for the Persian government. The family moved frequently and, when Bil was in ninth grade, they relocated to Switzerland. It was there that he learned to ski while attending school in a little village south of Neuchatel.

With World War II looming, the family returned to the United States. Dunaway attended Maplewood High School in New Jersey, where he joined a ski club and entered some ski races. After high school graduation in 1941, he hitchhiked across the country and took a job on a freighter that lumbered north along the West Coast, hauling supplies to Eskimo villages in Alaska.

He then enrolled at the University of Washington and was a member of the college’s undefeated ski team. The war caught up with him, however, and in 1942 he joined the 10th Mountain Division, the newly formed ski and mountaineering force that trained at Camp Hale in Colorado. He didn’t get to ski to Aspen like so many of the other troopers; instead, he was sent to the Army’s rock climbing school in West Virginia to teach climbing.

He later recalled, “Some of us were sent to Europe in the final stages of the War and ended up with the Italian campaign at Riva Ridge.” He earned a Bronze Star for his service as a leader of a reconnaissance squad on top of the ridge that drove back the Germans.

After the war, he returned to the University of Washington and the ski team. During the summers he guided on Mount Rainier.

Graduating from college in 1948, he married Jane Brown. The couple set off for Europe, where Bil studied French at the University of Grenoble in France on the GI Bill. Both Bil and Jane raced with the university’s ski team and competed and won medals at the World Collegiate Championships.

Their performances led to invitations to ski throughout Europe as unofficial U.S. representatives at the classic European ski races, the events that eventually became the World Cup. They went from resort to resort, race to race, for two winters. Dunaway remembered it as one of the best times in his eventful life.

One of those European summers provided a grand adventure of another type. He and Jane had bought a small sailing boat and planned to sail down the coast of England. They helped some other sailors who had run aground, and they all set off across the North Sea. During a huge storm, the two boats crashed and they lost their boat, their passports, everything.

Then it was back to the U.S. and Harvard, where Dunaway earned his masters degree in sociology. Then back to Europe, where he skied down Mont Blanc with renowned French mountaineer Lionel Terray, the first-ever ski descent of Europe’s highest peak. The descent was filmed and the resulting movie won first prize in the 1953 International Film Festival.

Returning to the U.S., Dunaway supported himself for awhile by touring with the movie, showing it and giving talks about the experience. While in Denver, he was asked to be editor of Skiing Magazine, a job that he held for a couple of years.

He had just been fired from that job when he came to Aspen for a veterans ski race. Taking a high-speed spill, he ended up with a cast clear up to his hip. He recalled the injury as a stroke of luck because it kept him in Aspen and allowed him to visit The Aspen Times. He had no intention of buying it, but he said, “I liked Aspen and I saw a future with the paper. I’d always been interested in newspapers and freedom of the press.”

His widow, Barbara Dunaway says, “He was egalitarian. He never spoke of races or genders of people or personalities. He lived by his own strong ethics.”

Long considered to be the voice and conscience of Aspen, week in and week out, he attended Aspen City Council meetings, reporting to his readers on what their government was doing.

When he first bought the Times in 1956, the city and county governments were run by entrenched politicians, men who had held the offices for years and made many decisions behind closed doors. Dunaway’s first big battle in Aspen was to insist that their decisions be made in public.

Much needed to be done in Aspen in the 1950s. Dunaway took photographs of the decrepit city water system and forced the city to renovate the water plant. He editorialized against the bullying tactics of a policeman and magistrate against newly arrived hippies in the 1960s and won the paper a commendation from the American Civil Liberties Union.

He crusaded against the Vietnam War. He supported the Ski Patrol strike and battled with the Aspen Skiing Company on many fronts.

His editorials won awards almost every one of the 38 years he owned the newspaper, from 1956 to 1994. He was named Outstanding Editor of Colorado by the University of Colorado Journalism School in 1962 and was named Editor of the Year by the Colorado Press Association in 1978. The Aspen Times, under his leadership, was named the outstanding newspaper in the state year after year.

Dunaway’s philosophy was that The Aspen Times should be a community newspaper. It should tell the people of Aspen what they needed to know. All stories were local, generated by staff writers, even though that cost more than using wire services and national columnists. This created a newspaper that was often contentious, but always focused on the community.

His employees appreciated his approach to editing, letting the writer be totally autonomous and critiquing after it was published. This forced reporters to check their facts.

Dunaway allowed his reporters to do things no one else dared to do. The Flyer, the precursor to today’s Aspen Times daily edition, was zany and filled with fun stories about dogs, recipes and spoofs on serious issues. The Times put out the first April Fool’s Day issues.

The staff had various names for Dunaway: “The Purple Prince” since he loved the color purple, and “Runaway Dunaway” as he was always taking off onto Main Street on his bicycle.

He was also founder and president of Canyon Cable TV, which brought TV service to Aspen and Rifle, and he was president of Aspen Broadcasting, which started KSNO, Aspen’s first radio station.

In addition, Dunaway was president and major owner of Climbing magazine for 14 years, and a founding director of the Aspen Savings and Loan. He also was a founder, board member and officer of Colorado West Broadcasting, which owned KMTS and KGLN in Glenwood Springs.

Dunaway was a partner in the group that bought land and built Aspen Raceways, as well as a limited partner and investor in the proposed Little Annie Ski Area.

A dance enthusiast (he could do a great jitterbug), Dunaway was a loyal and generous supporter of Aspen’s ballet companies, writing reviews of performances for many years. Every winter he served as a ski instructor to blind skiers in the BOLD program. He served on the board of the Aspen Music Festival and School and on the board of the Aspen Hall of Fame. He was named to the hall in 1999.

He wrote editorials advocating employee housing, and was also one of the first in the community to provide housing for his workers.

Dunaway’s editorials were not always about politics. He wrote yearly tirades against restaurants that served dinner on cold plates, and against cigarette butts. Every morning he could be seen picking up butts in front of The Aspen Times.

It wasn’t until the late 1980s that Dunaway, at the urging of staff members, decided to turn the Flyer into a daily edition of The Aspen Times, to ward off competition from the Aspen Daily News, which had started in the late 1970s.