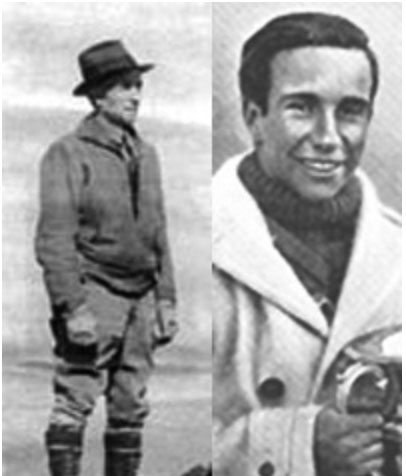 In 1932, at a cocktail party in LA, Aspen native TJ Flynn, with mining claims to sell, met Olympic gold medal bobsledder Billy Fiske, who, along with Ted Ryan of Aspen, wanted to see an American resort to rival Europe’s finest. They settled on the Castle Creek Valley near Aspen.

The Highlands-Bavarian Lodge opened in 1936 and operated ski tours in the valley. Guests would climb the surrounding mountains and ski down, back to the lodge at the confluence of the Conundrum and the Castle Creeks.

Flynn and Fiske—along with Ryan—proposed Colorado’s first major ski area on the slopes of Hayden Peak with the grand ambition of an aerial tram that would reach all the way to the 13,000-foot saddle south of Hayden Peaks’s summit—covering 3.2 miles of slope with a vertical rise of 4,000 feet.

Andre Roch and Italian Gunther Langes surveyed the east slopes of Hayden Peak, and the following year Flynn’s company obtained title to the ghost town of Ashcroft. A year later, the route of the aerial tram was surveyed. Ted successfully lobbied the Colorado Legislature to issue $650,000 in bonds for this valley-to-peak tramway, and a 1936 brochure, written by columnist Robert Benchly and entitled How to Aspen, sought endorsements and investors for the project.

The Highland-Bavarian Corp. was about to get its first chairlift when the United States entered WWII and all steel orders were cancelled. Fiske was killed fighting with the R.A.F. in 1940, and with the inspirational heart of the plans gone, their plans came to an end. But, after the war, the focus would shift to the town of Aspen where an infrastructure already existed and the spirit of the dream of Fiske, Flynn and Ryan would be realized.