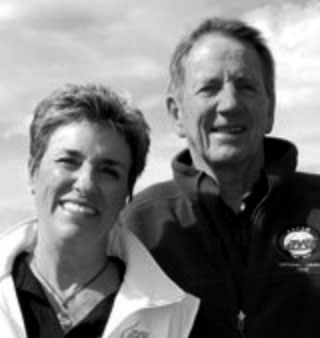 Tom Moore was born at the Aspen Citizens Hospital in January of 1942, and he and his two sisters grew up in Aspen. His father, Jim, was a barber at the Hotel Jerome, and the family owned Aspen’s first motel, “Moore’s Court,” at Monarch and Main. Mom Alberta did all the cleaning and laundry for the motel, and in 1954 his dad became the first realtor in Aspen.

Carolyn White Moore was born in Denver in 1943. The family moved to Rochester, New York, when she was three, and she was not to return to Colorado until she started college in Boulder in 1961. She was on the synchronized swimming team in high school and later in college, and became a camp counselor-in-training at Camp Quinibeck in Vermont in 1958; by 1960 she became a full waterfront counselor, and to this day continues friendships with her fellow Camp Quinibeck sisters.

Tom was an avid skier while growing up in Aspen. He competed “four way”—ski jumping, cross country, downhill, and slalom. At age seven he began racing with the Aspen Junior Ski Team under Gale Spence, continuing to compete through high school. He also trained with Cherie Oates.
At 13, Tom competed in the Junior Nationals and continued through four of the next five years, culminating when the Junior Nationals were hosted in Aspen. Throughout his teenage years Tom also played football, ran track (competing in two State championships) and played summer baseball (as a member of the Aspen Mountaineers team).

As a young teenager, Tom worked summers for the Aspen Music Festival as a stagehand and did repairs on the Music Tent fixing rips and tears. He also worked for the White River National Forest making new trails and putting in campgrounds. In the winters, he worked at Aspen Sports tuning and maintaining skis after school and ski team practice.

In 1960 Tom began college at the University of Colorado, with Carolyn following a year later in 1961. Carolyn joined the Chi Omega sorority, making more lifelong friends. Carolyn and Tom met in 1963, and Tom convinced her to return to Aspen with him for the summer, and she did just that, teaching swimming at the large Hotel Jerome pool for two consecutive years. They married in January 1964 and both graduated in 1965.

The young couple moved back to Aspen after graduation with their Irish Setters, various cats, and a guinea pig. Tom worked at the family real estate company, Moore Realty, and Carolyn worked at United Lumber as a bookkeeper under Dick Mill. In 1967 they moved to a dilapidated ranch on McLain Flats Road and have lived there ever since. Together they made the ranch and the ranch house livable and productive and began to raise a family. Son Travis was born in 1967, daughter Cinnamon in 1969.

Carolyn became involved with the Aspen Ski Club in the late 1960s, and became the coordinator for years for pairing ski racers with local families when they came to Aspen to compete. For two of those years this included World Cup racers. Many of the racers stayed with the Moores in their McLain Flats home. Carolyn was also an official recorder at Ski Club races for many years, and launched the very successful Las Vegas Night fundraiser, which yearly brought in support for the Ski Club while offering a rollicking good time.

She began working with her mother-in-law, Alberta, at the Thrift Shop of Aspen in 1972, and has worked there every other Thursday for 41 years straight, serving on the board since the 1980s. In 1983 she worked with Karen Ryman to coordinate plans for the building of a new Thrift Shop on East Hopkins Ave. at the present location. The current building was completed in 2009. In the Colorado Centennial year of 1976, Carolyn was president of the Aspen Historical Society.

Throughout the 1970s Tom volunteered with the Aspen Ski Club, starting as a part-time coach, then a member of the board for eight years, and president for two years. He served as Chief-of-Race and Race Chairman for many races, and was a National Technical Delegate, overseeing course preparation within the U.S. Ski Association’s guidelines. He has raised hay on McLain Flats since they moved out there, and seven years ago was elected President of the Salvation Ditch Co., an office he still holds. He has become somewhat of an expert in ranchers’ water rights which, he says, “the Salvation Ditch helps keep this side of the mountain green.”

In 1975, Tom began building detailed remote-control airplanes and competing throughout Colorado and Arizona, a hobby that he continues to do today. Around the same time he became a full-time cabinetmaker in his business, the Ute City Cabinet Company, working out of his shop on McLain Flats Road.

Tom has had a lengthy commitment to the Elks Lodge for the past 44 years, serving as trustee on and off for twelve years. He is a board member of the Max Marolt Scholarship Foundation, which awards aspiring young athletes financial support. With the family’s graces, he also provided the land for the AVSC’s new clubhouse up Maroon Creek and was instrumental in providing a ski lift up Aspen Highlands from that clubhouse.

Tom also is determined to keep the Nordic Trail System that once crossed the Moore’s property accessible to skiers. He created conservation easements that dedicated the trails in perpetuity for use by the general public. Today all the Nordic ski trails are maintained by the Aspen/Snowmass Nordic Council.

Carolyn served on the board of the Aspen/Snowmass Nordic Council, and has been a volunteer with the Forest Conservancy since 2006. She has served on its board for three years and on the Volunteer Committee for seven. She can be found, in uniform, on Tuesdays in the summer at the Maroon Bells as an ambassador or out on one of the hiking trails. She also volunteers at Aspen Valley Hospital’s physical therapy department, a routine she began after injuring her knee and spending time in that department herself.