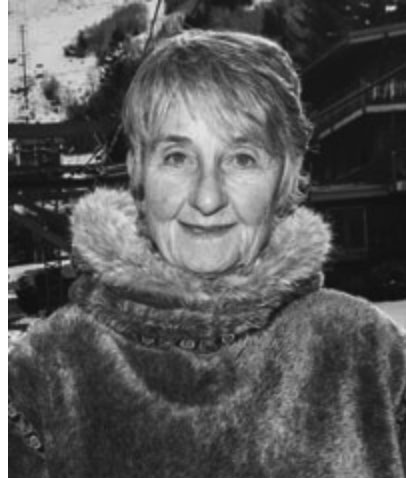 Cherie Gerbaz Oates was born on March 28, 1941, at the old Citizens Hospital in Aspen, located where the Commons Housing now sits. She grew up in a little white house on South 7th Street with her parents, Albina (Tekoucich) and Edmund Gerbaz, and brother Jim, who still lives in that house today. She spent many hours riding her horse “Dutch” throughout town, the surrounding backcountry and her family’s ranch in Gerbazdale.

She started first grade at the Red Brick School Building (a Civilian Conservation Corps work relief program) in 1947. A miracle truly happened that year when No. 1 Lift opened on Aspen Mountain. That lift allowed Cherie’s friends and family to have a winter activity right out their back door. The idea had been brewing since before World War II, but came to fruition just in time to launch Cherie’s lifelong love of skiing.

Cherie raced with her friends on the Aspen Junior Ski Team beginning at age 10 under the coaching of Gale Spence, culminating with skiing with the U.S. Ski Team training squad prior to the 1960 Olympics. Ski racing was the only competitive sport available to girls back then so she and her friends made the most of it. Some of Cherie’s fondest memories from those days were skiing as hard as she could at races in Winter Park and Steamboat with her friends on the girls team during the day, then racing back to the motel at the end of the day, where the girls would short-sheet the boys’ beds and slide down the laundry chutes.

In 1959, Cherie graduated from Aspen High School, also located in the Red Brick school building—her entire education took place in that one building! After high school, she attended Colorado State University, graduating with an elementary teaching degree. Then she returned to teach first grade at the Aspen Elementary School for the next nine years. She still sees some of her students in the valley and likes to take credit for all of their many accomplishments!

Cherie married Lennie Oates in 1967 and they started their family in 1970. During the ensuing years she remained involved in the education of Aspen children, teaching at Patsy’s Nursery School and serving as a teacher’s aide at the Aspen Elementary School. Other fun times occurred working for skier services at Aspen Highlands, baking desserts at Bonnie’s Restaurant (where she gained access to many wonderful recipes), and serving as an Ambassador on Aspen Mountain. She also spent many years as a home health aide at Aspen Valley Hospital and helping seniors at Whitcomb Terrace (or anyone else for that matter) whenever help was needed.

While Cherie is as busy today as ever with her family and friends, she still finds time to enjoy the many outdoor activities available in the valley. She remains an avid skier, biker and outdoor enthusiast, including completing two Leadville Trail 100 mountain bike races in her sixties and summiting Mont Blanc—the highest peak in the Alps—at age 71. If asked, Cherie would likely say, as Robert Frost so eloquently put it, that there is much that remains before her.
“And miles to go before I sleep,
And miles to go before I sleep.”