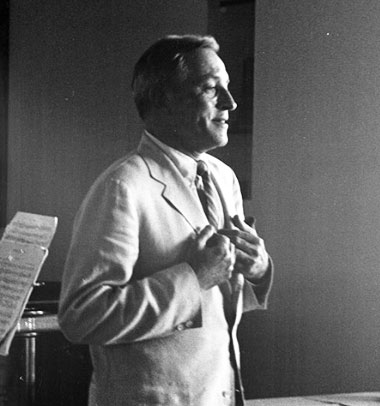 Courtlandt D. Barnes, Jr., was elected Chairman of the Board in 1952 of the newly formed Music Associates of Aspen. From New York, Barnes was a Yale graduate and a Wall Street stockbroker who also served as a Trustee of two music schools and Director of the Symphony Society. As a pianist himself, he felt the Music School was for the students- who were the most important element, even more so than the Festival itself, which he was an avid attendee. His Aspen home was the historic Highland Ranch at the confluence of Conundrum and Castle Creeks and the birthplace of Aspen Skiing and the original ski lodge. He lived there, hosting many dinners until 1963 when they sold the ranch and moved to Missouri Heights near Basalt. Barnes not only served as Chairman for 25 years, but was considered one of the Festival’s best fundraisers, sharing his passion for music and students. He passed away in 2011.