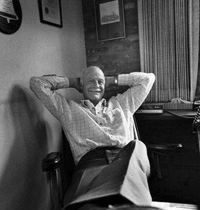 Brown helped the Aspen Skiing Corp. struggle to its feet in 1946 by leasing the firm hundreds of acres of mining claims on Aspen Mountain. He served on the first board of directors after industrialist Walter Paepcke formed the company. Brown later guided the company through its most prosperous period of growth as president and general manager for 22 years.

“I think he was as important as Paepcke,” said Mary Eshbaugh Hayes, a longtime Aspen journalist. “If he hadn’t made Aspen Mountain available, Paepcke, Friedl Pfeifer, none of them could have done it.”

A Yale University graduate, Brown had an incredible knack for reciting the right poems at the right times. He also was a longtime Carbondale ranch owner who was comfortable getting his hands dirty and hobnobbing with cowboys.

Friends said no job was too big or too small for Brown. He toiled on the Carbondale Board of Education and also served on the Denver branch of the Federal Reserve Board. He won election to the Colorado Senate in 1952.

Later in life, he was an eloquent letter writer, often taking jabs at the second President Bush.

“He had so many passions. This is a man who couldn’t be bored,” said Sue Smedstad, who went to work for Brown at the Ski Corp. in 1965 and became a vice president. “He was a person of incredible integrity, honor, depth of character, loyalty,” said Smedstad, noting those words can sound trite, but really apply to Brown.

In addition to all his accomplishments, Brown also was probably the last second generation Aspenite whose roots trace all the way back to the town’s founding as a silver camp. His father, D.R.C. Brown Sr., worked at H.P. Cowenhoven’s hardware store in Blackhawk, Colo., when they decided to try their luck elsewhere in 1880.

His father eventually became business partners with Cowenhoven, his future father-in-law. They amassed a fortune in the mercantile business and invested in some of Aspen’s most successful silver mines. Brown invested wisely in diverse interests and survived the 1893 silver crash that ruined many of his contemporaries.

The senior Brown’s first wife died, and he remarried in 1907. David Robinson Crocker Brown Jr. was born a few years later. He was raised in Denver but spent all his summers in Aspen.

Brown graduated from Yale in 1935, got into the oil business, then enlisted and served as a PT boat skipper in World War II. He got into ranching after the war.

Despite his diverse background, Brown will be best remembered for his contributions to skiing in Aspen, Colorado and the nation.

When Paepcke invited him to invest in the fledgling Aspen Skiing Corp., Brown didn’t hesitate. In an article reprinted in Hayes’ book, “The Story of Aspen,” Brown said he leased his family’s mining claims to the Ski Corp. for $100 per year and bought stock so he would have a lift pass. The first two chairlifts opened in January 1947.

Brown, who was described as typically humble, didn’t claim he had any foresight as an investor about how successful the ski industry would be. “I got tired of walking up that mountain,” he told Eshbaugh Hayes.

Brown practically ran the early Ski Corp. by default in the early years since he was the only member of the board of directors who lived full-time in the Roaring Fork Valley. In 1957, he formally took the reins as president and general manager, a post he would hold until he retired when the ski season ended in 1979.

The company had 25 employees when he began; it had 1,200 by the time he left. During his tenure, the Ski Corp. fully developed Aspen Mountain, bought and expanded Buttermilk and developed Snowmass Ski Area. The company’s skier visits skyrocketed from 259,000 in winter 1964-65 to 1.23 million in 1978-79.

Brown was decidedly old-school about skiing. He didn’t place a lot of stock in marketing, Smedstad, because the Ski Corp. did so well without it. The return business was 90 percent. The company was out of debt and had a 47 percent return on investment.

In December 1977, Brown received an offer that he advised the board of directors to accept. Twentieth Century-Fox offered to buy 100 percent of the Ski Corp.’s shares. Original stock purchased for 33 cents per share in 1947 was worth at least $39 per share. Brown stayed with the company for 18 months after the sale was approved.