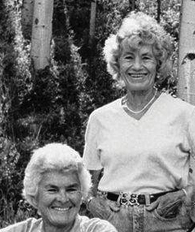 Together, they founded the Aspen Wilderness Workshop, a group formed after the 1964 creation of the Wilderness Act. The three huddled over kitchen tables to map out lands they believed should be kept free of motorized vehicles. They are credited with doubling the size of the Maroon Bells Wilderness Area and securing wilderness protection for the Hunter-Fryingpan, Collegiate Peaks, Raggeds and West Elk wilderness areas.

Connie Harvey survived rescue from the Andrea Doria—an ocean liner that sank off the coast of Massachusetts in 1956—to become a Colorado wilderness champion. Connie was nine months pregnant with her first child when she and her husband plunged into the Atlantic. Everyone who cares about the American West is grateful that she was plucked out of the water by a rescue boat.

Grit and determination have always been Connie’s trademark. She continues to oversee a cattle ranch and write a monthly environmental column for the Aspen Daily News. As one of her sons said, “I feel sorry for whoever she takes on.”

Dottie Fox served as trustee of the Aspen Center for Environmental Studies. She was a center of gravity for Aspen’s environmental movement and a political and policy organizer. No doubt Aspen’s well-earned reputation as an environmental bastion is due in no small part to Dottie and her passion lives on through the organizations and people she touched.

“She spent her life sharing her vision of wilderness—through watercolor and poetry and writing—with the world,” said Sloan Shoemaker, director of the Wilderness Workshop

Fox was a passionate outdoorswoman who loved wild places, from the mountains around Aspen to the Utah desert and the Grand Canyon, a place she wrote about in her 2000 book Below the Rim.

“She figured out ways to have fun doing important things,” said Cynthia Wayburn, who was on theACES board with Fox, and described her as a mentor and inspiration. “She had a tremendous joie de vivre, more than almost anyone I know.”

After Fox retired, members of the board pushed to make sure there was always someone with such a strong, passionate environmental voice.
“We realized we couldn’t replace Dottie, so we decided all trustees needed to pass the Dottie Fox test,” said Tom Cardamone, director of the center. “Today, all 21 trustees do their best to fill her shoes.”

In addition to helping found the Wilderness Workshop, Fox was a founder of Great Old Broads for Wilderness, a national group of senior citizen women wilderness advocates, and was a board member of the Southern Utah Wilderness Alliance.

Joy Caudill was honored as a AHOF inductee, along with her husband Sam, in 1998.