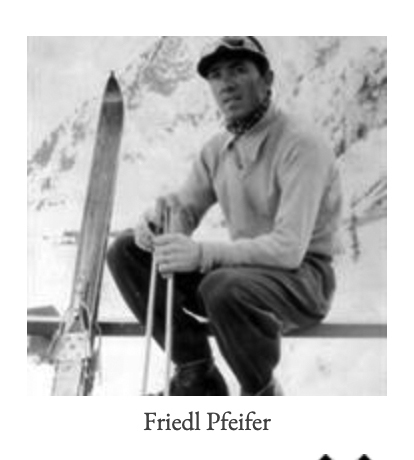 Friedl was born in Austria and skied to and from school in his hometown of St. Anton am Arlberg and joined the staff of Hannes Schneider’s famous ski school there at the age of 14.

A certified climbing guide at 18 and a member of the Austrian FIS team at 22, he became the first of his countrymen to win the Kandahar, considered in 1936 to represent the world championships.

Friedl left Austria in 1938. At that time he became a US citizen, winner of a national ski championship and the Harriman Cup, and director of the ski school at Sun Valley.

While training with the 10th Mountain Division at Camp Hale, during WW II, he was introduced to Aspen. He returned in 1945 to operate the ski school and helped to develop both Aspen (Ajax) and Buttermilk Mountains. During this period he organized professional racing and originated the popular dual slalom courses.