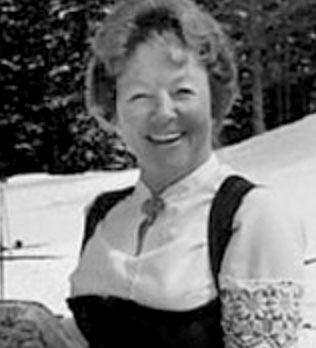 Gretl Hartl was born in Partenkirchen in 1923. She developed a passion for the mountains, and especially for skiing, very early on. Her parents ran a café at the Olympic Stadium in Garmisch. From 1941 onwards, Gretl also took part in official ski races, and ten years later she became a member of the German national team.

During the war, from 1943 to 1945, she worked on the Reichsbahn railway, but this did not stop her from continuing to ski.

In 1948, Gretl Hartl married Sepp Uhl; they both shared the same passion for skiing. In 1951 Dick Durrance, a skier who would become very successful later on, arrived in Garmisch-Partenkirchen from Aspen, intending to present his film footage of the FIS World Cup in Colorado. Gretl and Sepp were invited to the presentation and were so delighted that they decided to emigrate to the famous American skiing town. After the Uhls found enough money to finance their crossing from Le Havre to New York and the train journey to Denver and on to Glenwood Springs, they set off, and arrived in Aspen in November 1953. At first they lived there with their friend Wörndli in Alpine Lodge on Cooper Avenue. Later they rented a 45-dollar-a-month house on Main Street. Later on, Gretl emphasized continually that they had felt at home in Aspen from the very start, and that she and Sepp were immediately welcomed by the locals. They soon made the acquaintance of the famous skiing stars from Aspen. Sepp began work as a ski school supervisor, while Gretl found employment as a skiing instructor. She became one of the most popular teachers—so popular that soon not only the visitors but also the local skiing instructors themselves began taking lessons with her. She was popular with everyone, and soon became very well-known.

In 1966 Gretl Uhl decided to take over the new restaurant that the Aspen Skiing Association was planning to build on the mountain. She disagreed with the idea of making it a skiing hut that only served hot drinks, and employed 22 housewives to help her make the place a success. Gretl Uhl wanted to offer her guests far more than just hamburgers and hot chocolate: she wanted Bavarian-American cooking with only the freshest of ingredients. At Gretl’s there was always home-made soup, stuffed peppers and beef olives, but the most legendary speciality was her apfelstrudel, which made her famous far beyond Aspen as the “Strudel Queen”, and brought in vast numbers of visitors. “Gretl’s Tourtellotte Restaurant” was not only famous for its food, however, but also for its great atmosphere and lavish parties. Gretl was a popular boss who worked together with her staff rather than merely ordering them around. With her motto “two days on, two days off” she gathered a team of 36 employees around her, all of them skiers like herself. “Gretl’s Tourtellotte Restaurant” became the restaurant in Aspen. Among Gretl’s guests were hippies, skiing stars, and Hollywood stars such as George Hamilton and Jack Nicholson, Visitors came from all over the world.

This huge success ended abruptly in the skiing season of 1979/80, when Gretl was forced to give up her restaurant after a rent rise that was so high she could not afford it. This came as a serious shock to the local community: the “Aspen Times” admitted that “Aspen Mountain will never be the same—because Gretl’s restaurant won’t be there anymore.” Gretl found it very hard to take her leave of the mountains. She only went back into restaurant catering in 1982, when she helped Robert Cronenberg and George Schermerhorn to run the “Merry Go Round” restaurant in Aspen; the place still serves “Gretl’s Strudel” today. After her husband Sepp died in 1993 and her children Tony and Renate moved away, Gretl Uhl lived alone in her Aspen home, still famed as ever for her hospitality.