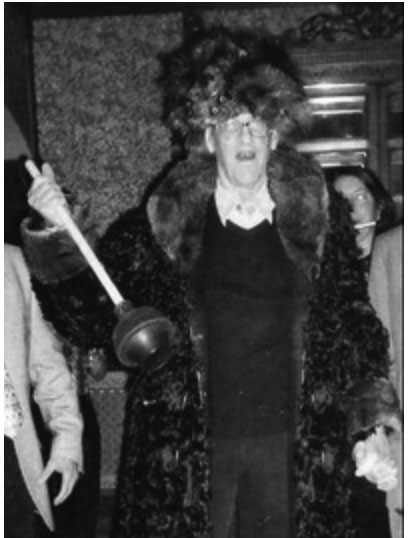 Dr. Whit was born on Jan. 30, 1927 in Harrisburg, Pa. He attended Mercersburg Academy, Haverford College and Temple Medical School. He played college basketball and football, and the 1948 Philadelphia Debutante list described him as “eligible, owns tuxedo, can dance and converse.” His college years were interrupted by two years of duty in the Navy during World War II. It was there he picked up a book on human anatomy, immersed himself in it and determined to become a doctor.

In 1953 Whit, his first wife, Yolande Shaw, and his two children, Michael and Deirdre, moved to Denver to begin his medical internship. He was chief resident in internal medicine at the University of Colorado medical school in 1958-59. That year, his sister, Martie Sterling, and brother-in-law, Ken, persuaded him to move with his children to Aspen and combine family forces at the Heatherbed Lodge. He commuted to a staff position at the VA Hospital in Grand Junction until Dr. Bob Oden stopped him in Sardy’s Hardware Store one day to ask him to join the Aspen Clinic.

In Aspen, Dr. Whitcomb was always a presence. A patient gave him a full-length, oversized raccoon coat. Each winter he appeared around town like an amiable Kodiak bear. He led parades, made house calls and presided at hospital benefit dinners. In his office he greeted the sick with hugs – or sometimes an impromptu dance, always with a listening ear and open heart.

Music was his soul food: concerts in the music tent, duets at home. He loved to sing, dance, play his bass. In the early years, on a rare night off, he could be found at the Red Onion displaying his exuberant jitterbug style. He even appeared in a special Wheeler Opera House performance of “Sunday in the Park with Harold” and later in the musical adaptation of “The Quiet Years.” He owned a beautiful baritone voice and could sing Vaughn Monroe classics better than Vaughn. But jazz was his passion. In 1967 he co-hosted the first jazz festival at the Hotel Jerome, featuring Count Basie, and Cal Tjader. He played his familiar red and white bass on stage at the Red Onion with the Eric Lawrence Trio, with the Dirty Old Men and later with Walt Smith and Friends at the Sopris Restaurant.

In 1968 Whit married Polly Bent and became father to her two little girls, Verena and Thea. In 1970, their son Oliver was born. Whit and Polly’s life together was filled with adventure, sharing with each other their enthusiasm for wilderness. The family enjoyed hiking in the mountains and deserts and rafting many of the rivers of the West.

Dr. Whitcomb was not an ordinary M.D. He was a true healer. Although trained traditionally as an internist, he was far ahead of his time, mixing healthy doses of alternative medicine, vitamins and bioenergetics into his practice. Forty-five years ago he was the rare physician who invited fathers into the delivery room, and before Aspen had its first veterinarian, he doctored numerous dogs, cats, horses and mules, often stepping outside the back door of the Aspen Clinic to treat an animal emergency. He rarely met a person he didn’t like – or who didn’t return the sentiment. He especially loved Aspen’s old ranchers and miners, and spent hours listening to their stories.

He was elected Pitkin County coroner in 1970, a position he held for 12 years, and was an Aspen Valley Hospital Board member for another 12. He co-founded the Aspen Skiers Educational Fund and was an executive committee member of the Center for Frontier Sciences at Temple University. In 1987, after witnessing the departure of many of Aspen’s beloved old-timers, he began lobbying the hospital for an assisted living center. In 1990 the doors of the Castle Creek Terrace Assisted Living Center opened, and Dr. Whit became the medical director.