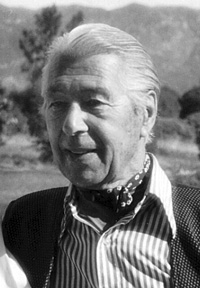 Bayer apprenticed under the artist Georg Schmidthammer in Linz, Germany. Leaving the workshop to study at the Darmstadt Artists’ Colony, he became interested in Walter Gropius’s Bauhaus manifesto. After Bayer had studied for four years at the Bauhaus under such teachers as Wassily Kandinsky and László Moholy-Nagy, Gropius appointed Bayer director of printing and advertising.

In the spirit of reductive minimalism, Bayer developed a crisp visual style and adopted the use of all-lowercase, sans serif typefaces for most Bauhaus publications. Bayer is one of several typographers of the period including Kurt Schwitters and Jan Tschichold who experimented with the creation of a simplified more phonetic-based alphabet. Bayer designed the 1925 geometric sans-serif typeface called universal, now issued in digital form as Bayer Universal.

In 1928, Bayer left the Bauhaus to become the art director of Vogue magazine’s Berlin office. He left Germany in 1938 to settle in New York City where he had a long and distinguished career in nearly every aspect of the graphic arts. In 1944 Bayer married Joella Syrara Haweis, the daughter of poet Mina Loy.

In 1946 the Bayers relocated. Hired by industrialist and visionary Walter Paepcke, Bayer moved to Aspen as Paepcke promoted skiing as a popular sport. Bayer’s architectural work in Aspen included co-designing the Aspen Institute and restoring the Wheeler Opera House, but his production of promotional posters identified skiing with wit, excitement, and glamour. Bayer would remain associated with Aspen until the mid-1970s.

Bayer gave the Denver Art Museum a collection of around 8,000 of his works.
In 1959, he designed his “fonetik alfabet”, a phonetic alphabet, for English.
Bayer’s works appear in prominent public and private collections including the MIT List Visual Arts Center.