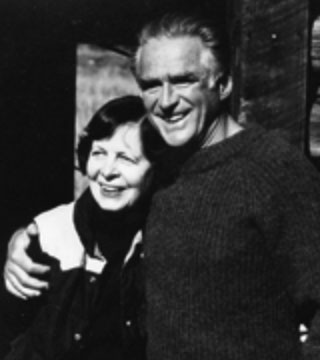 Not many people came to Aspen on a personal invitation from Walter Paepcke—as a “first-rater” worthy of founding-father status. Following his “intuitive feeling” that Mace was the best at what he did, Paepcke wrote a letter urging Stuart to relocate his dogsled touring operation from Boulder to Aspen.

Stuart and Isabel had already fallen in love with the area surrounding the ghost town of Ashcroft in the Castle Creek Valley. They struck a deal with Ted Ryan, who owned about a thousand acres up Castle Creek. The trade was a lifetime lease on 2.7 acres in exchange for their stewardship of a valley that had been stripped clean by overgrazing.

In 1949, the Maces, with two kids in tow and one on the way, rolled up their sleeves and got to work. The fruit of their labors was the lodge they named Toklat, the Eskimo word for a glacial mountain valley. Mace and his family built Toklat out of recycled materials, including stone from the old school, logs from an old coal mine and marble left behind at the closed quarries.

At the beginning, Toklat served as a lodge, the Mace family home, and headquarters for the new stewards of the Castle Creek Valley. Also making their home at Toklat were 20 malamutes, brought from Boulder, the hearts and souls of the Maces’ dogsled tours. Carried over from his World War II days, Stuart could no more have left the huskies behind than one of his children. A conscientious objector who refused to carry a gun, Stuart served in the war by training sled dogs who could help rescue wounded soldiers in alpine conditions.

For Stuart the mountains, valley and forests of Castle Creek were the ideal backdrop to raise the next generation of Maces. “I wanted to give my kids a place to build their mind, body, imagination, and artistic sense,” said Mace in an episode of Bill Moyers’ Journal, an acclaimed public television series. “You can’t appreciate your fellow man until you appreciate nature; without that you can’t feel any wholeness.”

Stuart and Isabel Mace opened Toklat as a lodge and dogsled touring operation. But tucked away in the recesses of the Castle Creek Valley, their financial survival depended on sensing when it was time to try a new approach. So every decade or so, Stuart and Isabel, with the help of however many of their five children were old enough to lend a hand, devised a new way to tempt people to make the trip out to Ashcroft.

In Toklat’s early years, the Mace family malamutes were clearly more famous than their owners. They were the canine stars of the television series Sgt. Preston of the Yukon, in which Stuart was a stunt man. The talented pups also made star turns in other TV shows as well as a Disney Christmas special.

In “Living Free in the Rockies,” the episode of Bill Moyers’ Journal, made in 1974, Stuart told Moyers an ethic of hard work and self-reliance were the bequests he wanted to leave his children, rather than earthly goods. “I tried to leave the children a heritage of inner strength…. Anything they get from me they’ll get before I go.”

In 1959, the Maces got out of the lodge business and decided to concentrate on just food—and, of course, dogs. The building in Ashcroft became just the Mace home, for both human and canine family members, and the name Toklat served to cover both the continuing dogsled operation and a new restaurant the Maces built in downtown Aspen, on Durant Avenue. A restaurant seemed a natural evolution from serving three meals a day for lodge guests, noted Isabel. After 10 years the Maces headed back to Ashcroft full time.

Then after three years of Toklat being just a restaurant, the Maces again reinvented the family business. This time the final reincarnation of Toklat—into an art gallery—would last more than the decade-long cycles of its predecessors.

Through all of Toklat’s transformations, however, Stuart Mace also played the role of “fierce protector” of the Castle Creek valley. “If he saw anyone doing anything harmful to the environment, he’d screech to a halt, jump out and let them know if they didn’t stop they’d have him to deal with,” recalled Tom Cardamone, director of Aspen Center for Environmental Studies (ACES). “There was nothing gentle about his approach.” As a founding trustee, Stuart was “right up there with Elizabeth Paepcke as the most instrumental in shaping ACES,” Cardamone said.

Stuart is described often as “larger than life” and “ahead of his time” regarding his views and conveyance of those views about the natural world. Apparently he didn’t pay much heed to the stereotype that people who truly cared about the environment were supposed to be mild-mannered in their approach. “With his bushy eyebrows, penetrating eyes and brash and raspy voice, he electrified people. He stopped people dead in their tracks,” said Nancy Wood, a poet and longtime friend of the Maces. “Stuart could talk anyone into anything. He was so passionate. He had this energy, this aura. You never said ‘no’ to Stuart.”

Always interested in photography and crafts, Stuart ushered Toklat into a full- time gallery. There was always a gift shop at Toklat, but in 1978 the operation’s entire focus turned to displaying and selling arts and crafts.

Isabel fondly recalls that Stuart had a touch, a gift for almost any medium of art. He was an avid photographer and worked well with wood, stone and paint. “He could do anything he took a liking to,” Isabel said. “He could just watch someone do something and then do it.”

—Excerpted from “A Special Place, A Special Family” by Sarah Chung of The Aspen Times, August 14–15, 1999. Photo courtesy of the Aspen Historical Society