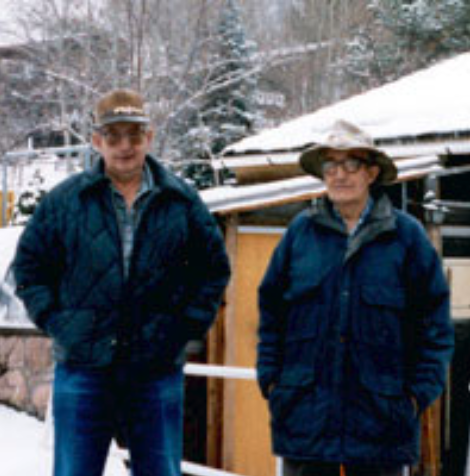 Frank Dolinsek was an outdoorsman and avid skier who helped develop Aspen during its early stages as a ski destination.

Dolinsek was born in Grand Junction on Aug. 31, 1923, and grew up in his family’s Aspen home on South Monarch Street, which was built in 1889 and still stands today. His brother, John, and his sister, Josephine, still live in the Aspen home.

Dolinsek was an avid skier, hunter, climber and fisherman. He was also a skilled mechanic and welder.

“Frank was a great fit with this area,” John Dolinsek said. “He loved Aspen, and he loved the mountains.”

As kids, Frank and John learned to ski on 8-foot-long skis that Frank found on an ore chute on what is now Shadow Mountain.

After graduating from Aspen High School, Dolinsek joined the Army and served in the 10th Mountain Division during World War II. The 10th was known for its ability to work in mountain terrain and snow. Dolinsek was an artillery specialist and spent most of the war serving in the mountains of Italy, where he earned a Bronze Star for his service.

After the war, Dolinsek returned to Aspen and worked on Lift 1, the first ski chairlift in the area, and Lift 2, a chair that would go up to the current location of the Sundeck restaurant.

The original Lift 1 actually was boarded in the Dolinseks’ backyard for just a few dollars and attracted skiers from all over the country. John and Frank ran the lifts with Frank also being the main mechanic.

Frank Dolinsek worked for the Aspen Ski Corp. until 1960. He then worked for the city of Aspen Street Department as a welder and mechanic for nearly 20 years until he retired.

People could count on seeing Dolinsek wearing a hat and a smile, according to his sister.

“Frank was someone who always seemed happy,” Josephine Dolinsek said. “He loved to help people and stay busy. He never cussed and had a great sense of humor. Frank could always make me smile.”

“He was a true gentleman with a constant thirst for knowledge,” close friend Alice Feldman said. “Frank really was a living legend. I used to call him the unofficial mayor of Aspen, and he always seemed to represent all the good things about Aspen.”