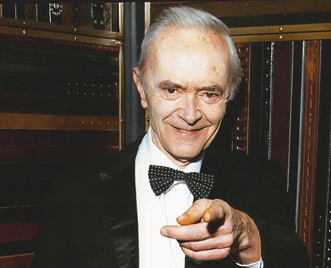 Jon grew up in Portland, Oregon. Coming from a musical family, he played the bassoon. As first bassoon in the Portland Junior Symphony, Jon received a scholarship to attend the Aspen Music School in 1964; the last year the music festival used the original music tent. In 1965 he returned on a work scholarship and from 1966–1968 was second bassoon in the Festival Orchestra. Jon took a position with the Indianapolis Symphony, however, having esthetic differences over hair length, the Symphony let him go in 1969 and he moved permanently to Aspen.

One of Jon’s first jobs in Aspen was working for the Hi-Fi Shop, the owner of which had been hired by a group of investors to put the FM radio station KSPN on the air. Jon was originally hired as a carpenter to build the studio in the basement of the Hotel Jerome and later become station manager, a position he held from 1970-1974.

Jon is known around Aspen as the “Movie Man.” His interest in movies began in high school after working in the neighborhood movie theater where he’d climb a tall ladder twice a week to change the movie titles. Jon learned the art of film projection at a young age. It was a perfect job for the college student at Portland State.

In 1972 Bill Pence, who went on to found the Telluride Film Festival, and Don Swales leased the Wheeler Opera House Theater and offered Jon a position managing their film program. He once again became a projectionist and in 1975 went to work for the Telluride Film Festival where he became technical director, a position he held for more than 20 years. He was also technical director of Aspen Filmfest and the Hawaii International Film Festival for many years. Except for a brief hiatus, Jon programmed film at the Wheeler until 2009.

Jon was active in many other community activities. In 1974 he became one of the founders of Aspen Gay Ski Week, the first event of its kind in the United States and to this day the only one that is a non-profit. In 1977 he heard that Portland, Oregon had passed a gay rights ordinance. Jon obtained a copy and with the help of local attorney Ralph Brendes, took a customized version to Aspen’s City Council where it was unanimously passed in 1978. This ordinance was the first gay rights ordinance in the State and became the model adopted by communities throughout the region.

In 1974 Jon proposed that the conservative local newspaper Aspen Today should have a liberal voice, which started Jon on a literary course that eventually took him to both the Aspen Times and Aspen Daily News.

Jon had his hand in many smaller local endeavors. Aspen was given a stockpile of antique streetlights that sat at the water plant for years. Jon persuaded the City to install them on Main Street. When they ran out, Jon found a source of reproductions of a similar design in Portland, Oregon. He even picked the “blue spruce” color for the lights. It helped that Jon was on the Commercial Core & Lodging Commission, a position he held for 18 years.

Not all of Jon’s endeavors were successful; in 2002 he and a group of local visionaries purchased six antique American streetcars, circa 1900, from Lisbon, Portugal with the goal of operating a Galena Street Crosstown Shuttle. A change on City Council doomed the project and eventually the streetcars were given to municipalities and organizations in Tucson and Seattle and as far flung as Whanganui, New Zealand.

Jon has held other community positions. He served on the Wheeler Opera House Board and a city trails and pedestrian task force. He was instrumental in securing what is the largest pipe organ on the Western Slope for the Community Church. He located a historic organ for St. Mary’s and a digital organ for the Aspen Music Festival and School, a non-profit he has supported for many years. Jon currently runs a specialty film program for the Pitkin County Library.

2019 marks Jon’s 50th anniversary as a resident of Aspen.