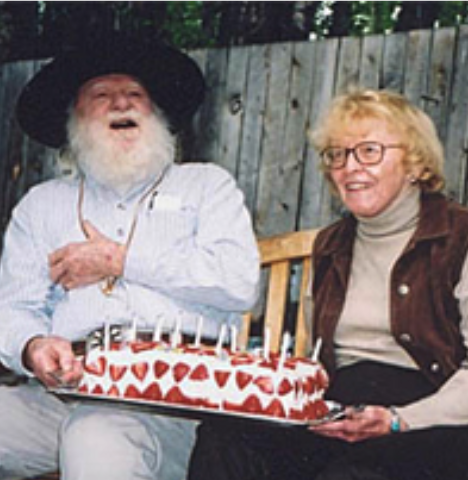 Sam Caudill was one of Aspen’s pioneer architects whose professional mark is stamped on public projects throughout the Western Slope, especially the Glenwood Canyon Interstate 70 project.

“I believe 90 percent of why the canyon project turned out the way it did was Sam,” Ralph Trapani, who was the state’s engineer on the project, said Tuesday. “He was an inspiration to me. He had the concept of stewardship and he had the credentials.”

The colorful Mr. Caudill, who reveled in the nickname of “Coondog,” capped the 1992 dedication of the $480 million Glenwood Canyon project with his trademark wolf howl that echoed down the long Hanging Lake eastbound tunnel.

“He and his wife Joy contributed so much,” said Aspen Mayor Helen Klanderud. “He had a formidable presence, and he leaves his mark.”

Sven Alstrom, who has an architectural firm in Aspen and Kansas, said he moved to Aspen in 1988 to work for Mr. Caudill.

“He had honor, stature and mystique,” Alstrom said. “He and Joy were a perfect pairing, and he taught me how to go for a walk. He loved the mountains so much.”

Mr. Caudill chaired the I-70 Citizen’s Advisory Council and never stopped pushing for the protection of Glenwood Canyon’s environment in the design and construction of the I-70 segment, said John McCarty, who at the time was a landscape architect for the Colorado Department of Transportation.

“He made sure CDOT followed through on its commitments,” McCarty said. “He was dedicated to the preservation of our natural settings.”

Mr. Caudill was born in Tulsa, Okla., and grew up in Shelbyville, Ky. His college years at Cornell University were interrupted by World War II, in which he served with the Office of Strategic Services, working with Chinese parachute guerrilla fighters near the Burma border.

He moved to Aspen in 1952, when he met and married Joy Maxwell, and his architectural practice thrived.

Among the many buildings he designed were Aspen’s schools, art museum, library and airport as well as schools from Meeker to Telluride and the Veterans Affairs facility in Grand Junction.

In 1992, he was named Colorado Architect of the Year by the American Institute of Architects.

He served on the local planning commission, chamber of commerce and board of appeals, and the state’s Wildlife Commission and Water Quality Control Commission.

He played a number of instruments including the bagpipes, and for years led golden retrievers in the Wintersköl Parade. An outdoorsman, he and his family camped, hiked, fished and hunted.

Joy, along with Connie Harvey and Dottie Fox, is largely responsible for the creation of the three wilderness areas surrounding Aspen: Maroon Bells-Snowmass, Hunter-Frying Pan, and Collegiate Peaks. Together, they founded the Aspen Wilderness Workshop, now the Wilderness Workshop, which served as the lead organization in the successful grass-roots effort to protect these wilderness areas.