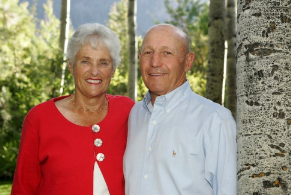 The Zanins’ combined business talents and service work is extensive. Joe will build almost anything anyone needs and has served on a variety of boards, and Judy has helped keep the hospital on track for years, serving as both a volunteer herself and a coordinator of all the volunteers.

The two grew up together in Ouray, Colorado. Joe and Judy’s parents were great friends but the two youngsters didn’t have much to do with each other until Joe returned from a two-year stint in the Army’s 10th Division where he was stationed in Germany. Judy was a senior in high school. They married in September 1959.

Both Judy and Joe graduated from CSU in Ft. Collins—Judy in business administration and Joe in industrial construction management. A job at the Aspen Valley Lumberyard, run by Tom Sardy at the time, brought the couple to Aspen in the spring of 1964. Soon the Zanins were a family of four and had moved into a home Joe built.

Joe Zanin Construction, Inc., began in 1970. Joe’s residential construction business continued to grow for the next 32 years until his retirement in 2002. His handiwork can be found all over town in the many beautiful homes he built.

Joe’s construction background has served him well in many volunteer roles. He designed and built the “launch ramp” for the Rotary Club’s first Ducky Derby in 1992 and he’s been on that job ever since. As a 32-year member of the Rotary Club, Joe helps cook for the Sunshine Kids dinners and for the Ducky Derby “stickering” party, and is a Salvation Army bell ringer.

He also has served on the boards of the Aspen Camp School for the Deaf and Hard of Hearing, the Aspen Consolidated Sanitation District, the Pitkin County Board of Adjustments and the Aspen Hall of Fame. Joe was president of the Aspen High School Booster Club and served on advisory boards for U.S. Bank and the Aspen School District woodworking department.

Judy was a stay-at-home mom and the bookkeeper for Joe’s business. While raising her children and baking homemade chocolate chip cookies for their friends, she was actively engaged in volunteerism for numerous ventures including The Thrift Store of Aspen. She has been a volunteer in radiology and same day surgery at Aspen Valley Hospital (AVH) for 21 years.

Judy was named AVH Volunteer of the Year in 1993/1994, and later served as president of the volunteers. As a board member of the Aspen Valley Medical Association (AVMF), she served as treasurer and president, as well as on two of its committees, one of which awarded medical and health-related scholarships for individuals and AVH departments.

Judy is a member of the Aspen Chapter of Philanthropic Education Foundation (P.E.O.) that raises money for women’s continuing education scholarships and she coordinates the Christ Church Knitters. The Knitters sell winter hats and scarves to raise money for Christmas baskets for the less fortunate. The Zanins love the outdoors and have always taken advantage of the many outdoor recreational opportunities that Aspen and the surrounding area offer. They have spent countless hours hiking, camping, skiing, biking, hunting, and playing golf. They also love spending time at their cabin above Paonia Reservoir. The Zanins admit their favorite activity of late has been watching their two granddaughters grow up in Aspen.