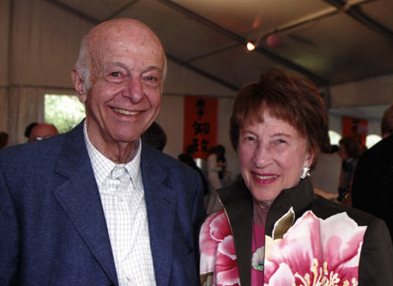 Born and raised in Des Moines, IA, Kay was exposed to music and art at home and school. She studied at Grinnell College, where she was editor of the college newspaper, the first woman to win the job. After graduation, she bicycled through Europe and then worked as a public radio producer.
Matthew was born in Marshalltown, IA, raised modestly by immigrant parents. Kay says he “grew up on the mother’s milk of mid-western kindness and natural courtesy.” After serving in the Army Air Force in the South Pacific during World War II, he went to University of Iowa where he graduated cum laude with a degree in Economics. After college, Matthew began working in his family’s grocery business.
Matthew and Kay met on a blind date in 1951 and were married 10 months later. In the summer of 1953, Matt and Kay visited Aspen to celebrate their first wedding anniversary. Two significant things happened during that visit to Aspen which led to Matt and Kay’s lifelong love affair with Aspen.
One day, as they were having lunch, they heard music coming from open windows as music students practiced. They attended two concerts at the Music Tent while in Aspen. Years later, Kay learned that those two concerts were the first that Matt had ever attended. That summer visit to Aspen changed their lives, and ultimately the course of the Aspen Music Festival and School.
On the same visit, the couple took a summer chairlift ride to the top of Aspen Mountain, and Kay knew she wanted to learn to ski in Aspen. For five winters, they rented a house before deciding to build their own home in downtown Aspen. While building that first house, Kay made Aspen her summer base while Matt commuted to Iowa for the workweek.
Daughter Ann was born in 1954, followed by son John in 1956. They enjoyed ski vacations as a family, and the children cultivated the same love of Aspen that their parents had developed on their first anniversary.
Over the years, Matthew and Kay became more involved with Aspen and the Aspen Music Festival and made many friends there. Spending more time in Aspen, they hoped for a larger home. They bought 16 acres of property on Willoughby Way and built a new home which became the center of three generations of Bucksbaum lives.
Matthew first served on the Aspen Music Festival and School Board in 1985. He later became chairman, serving two separate terms from 1999 to 2002 and again from 2005 to 2006. During Matthew’s tenure, the current Benedict Music Tent was built. Kay also served on the Music Festival Board and as Board chair from 2010 to 2012.
In 1997, the Bucksbaums funded an endowment that supported the “New Horizons” program that provides scholarships to 30 exceptional music students to attend the music school for three summers.
When Alan Fletcher became president of the Aspen Music Festival in 2006, he noted the serious condition of the Music School campus buildings on Castle Creek Road. He called on the Bucksbaums, proposing an entire campus of new buildings that would serve the Music School in the summer and the Aspen Country Day School during the remainder of the year. The Bucksbaums answered the call, and Phase One of the beautiful new “Matthew and Carolyn Bucksbaum Campus” was completed in 2014. Sadly, Matthew did not live to see it.
Many other Aspen organizations have benefited from the Bucksbaums’ participation and support. They were involved with the Aspen Institute as fellows, and Kay attended the International Design Conference in Aspen for five years, originally working as a volunteer. The Aspen Center for Environmental Studies was, in Matt’s eyes, one of the gems of Aspen, and he was an early supporter of ACES’ purchase of the Rock Bottom Ranch near Basalt.

They have also been enthusiastic supporters of Anderson Ranch where Kay, an avid amateur photographer, took several workshops and now supports high school students with Anderson Ranch scholarships each year. In 2007, Anderson Ranch awarded the Bucksbaums its “Service to the Arts Award.”

The Bucksbaums have also been long-time supporters of Aspen Santa Fe Ballet, Aspen Historical Society, and Aspen Valley Hospital Foundation. As a family of 10 skiers, there were numerous visits to Aspen Valley Hospital, a community amenity for which the family holds much gratitude!

For over 65 years, the Bucksbaum family has enjoyed a love affair with Aspen, and their love for their adopted home has tremendously benefited Aspen, Snowmass and the Roaring Fork Valley.