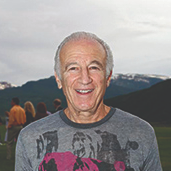 It was love that brought Leonard “Boogie” Weinglass to Aspen in the early 1980s. He had fallen in love with a Baltimore woman named Gabrielle Pepper, who said she’d marry him if he would move to Aspen. His rags-to-riches story as a hard-knock kid of a single mother in a poor Baltimore neighborhood who ended up a self-made millionaire influenced his eventual role as a major philanthropist. The guidance and mentorship he received as a boy from a basketball coach led to his involvement with the Buddy Program around 1987 when he opened Boogie’s Diner in Aspen and became the sponsor of an annual five-mile race benefitting the program.

But Boogie wanted to do more, so he began hosting the Boogie’s Bop at his ranch on McClain Flats in 1999. The Bash for the Buddies along with the Boogie’s Buddy Race raised millions of dollars over the years to help support youth mentoring in the Roaring Fork Valley. The race will celebrate its 30th year in 2016.

Boogie’s generosity has not only involved millions donated to his many charities and foundations, but has also quietly helped many individuals, from providing college tuition to disadvantaged youth to covering medical expenses for those who couldn’t afford needed surgeries. His favorite quote is, “It is nice to be important, but it is more important to be nice.”