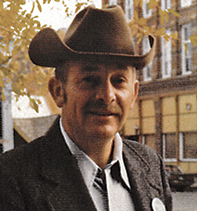 LtCol Richard Merritt, U.S. Marine Corps (Ret.) was born in 1935 in Seattle, WA. He was raised in Enumclaw, a small town at the base of Mount Rainier, where his love of the outdoors and his spirit of service first took root. In high school, Dick attained the rank of Eagle Scout, was student body president, and spent summers fighting fires for Washington’s Division of Forestry. He earned both Bachelors and Masters degrees from the University of Washington.

While in college, Dick received the Navy Reserve Officers Training Scholarship and was commissioned a Second Lieutenant in the U.S. Marine Corps in June 1957. “The Colonel” proudly served his country for 26 years, four in the Navy and 22 in the Marine Corps. He served overseas in the Philippines, Vietnam, Republic of China, and Japan, as well as stateside.

Dick married his wife, Patricia, in 1975 and they adopted two Taiwanese children while he was serving in the Taiwan Defense Command. He retired from military service and moved to Aspen in 1979.

Dick’s childhood love of skiing drew him to Aspen in 1967 while he was on leave from Vietnam. He fell in love with Aspen and soon purchased property, knowing that he would retire here. Dick began teaching skiing at Aspen Highlands in 1971 while on military leave and continued to teach skiing and work on the Ski Patrol after his military retirement. He served as Vice President of Aspen Highlands from 1979-1991. Dick recently retired from Aspen Skiing Company after a staggering 35 years of service to the Aspen ski industry!

In 1982, Dick ran for Pitkin County Sheriff.  While he didn’t win, he is proud of his effort.  Currently Dick is a manager at the Roaring Fork Club in Basalt.

Dick’s unwavering commitment to serving country and countryman knows no bounds. In the 1980’s and 90’s, as a board member for Aspen Junior Hockey, Dick coordinated the first High School International Hockey Tournament in sister city Garmisch-Partenkirchen, Germany, where the Aspen team finished third.

>Dick is a past member of the Rotary Club and currently serves on the Board of Directors of the Aspen Grove Cemetery and the Smiling Goat Ranch, serving autistic children and veterans recovering from combat trauma. In 2014, he received the Pitkin County Cares Volunteer Service Community Pride Award for his work interviewing local veterans for a permanent video record at the Library of Congress. The Colonel is a board member of Huts for Vets that helps veterans gain tools for enhancing mental, physical, spiritual and emotional health. Most importantly, he ventures into the mountains with these combat veterans as they begin their journey of healing. Dick works with the Aspen Institute and local schools to educate school children and the community about veteran’s issues and is now working with Building Homes for Heroes to provide a home for a Marine Corps sergeant who sustained injuries serving in Afghanistan.