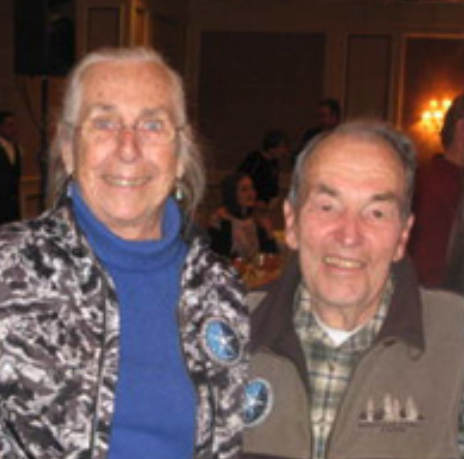 Though he grew up in Massachusetts and graduated from Dartmouth with a degree in physics, Ralph Melville always wanted a ski lodge. A friend, Olympic Ski Teamer Brookie Dodge, encouraged Melville to consider Aspen. And so he did, to ski bum, in the winter of 1951.

“I thought the place was overbuilt,” Melville says today. “Lodges had been built for the FIS race in 1950, but now they were all empty.” Melville wanted to stay and ski, so he got a job working at the soda fountain in Matthews Drug (now Carl’s Pharmacy) and at the Sundeck. The latter assured him a ski pass.

Melville headed back to Massachusetts to learn to be a builder but returned to Aspen in the winter of 1953. He promptly broke his leg skiing, which gave him ample time to ponder his ski-lodge dream. He considered purchasing the seven lots where the St. Regis sits today, but the $4,500 price was out of reach.

His opportunity came through Edna Salisbury, who owned two lots on the corner of Durant and Mill. Melville bought them for $2,000 and began building the Mountain Chalet in 1954. He opened the lodge for Christmas 1954 with three usable rooms. By the end of winter the lodge had expanded to nine.

Marian Melville (née Headley) came to Aspen, at friend Dottie Kelleher’s recommendation, to ski bum for the winter of 1955-1956. A whirlwind courtship with Ralph ensued. They met in June of 1956 and married that August in Marian’s hometown of Pittsburgh.

Back in Aspen, the inn-keeping couple oversaw additions to the lodge at a steady pace. 1958 to 1963 witnessed expansions in every direction: basements, wings and floors were all tacked on. Through the years, adjoining lots were purchased, until there were five in all, to accommodate the chalet’s rambling enlargement. The Melvilles created a hubbub in 1966 (some things never change) when they secured a permit to expand to eight-stories (though they never went that high). They built the swimming pool in 1972.

Rooms were continually upgraded, bringing more private baths. Explains Ralph, “The early ski bums weren’t fussy. They just wanted a room to crash in after a day of skiing. But then things changed; our rooms kept becoming nicer.”

The Ritz-Carlton (now the St. Regis) began construction just above the Mountain Chalet in 1989—on the same seven lots Ralph had eyed back in 1953. Mohammed Hadid, who was building the Ritz, tried to buy Ralph out but he wouldn’t sell. With his impish grin, he remembers he thought about waiting until the Ritz was about to open and then renaming the Mountain Chalet “Main Entrance.”

From 1989 to 1990, Ralph built another major addition—a conference room, an exercise room and parking. In 2002 and 2003, the Melvilles added the fourth and fifth floors.

As the lodge grew over the years, so did the Melville family. There are six Melville children: Julie, Frank, Nancy, Susan, Karen and Craig, and two adopted children, Riley Pond and Kai Ginter. For years the family lived in the lodge. “The lobby was the children’s living room,” says Marian. “They started helping as soon as they could. They loved the switchboard.”

Craig says he started working in the lodge when he was 11 or 12. “I’d sit at the desk in summer, answering the phone,” he recalls. “It’s all we knew.”

The Melville brood has assumed increasing responsibility at the lodge. Susan ran it for 12 years; Craig is now the manager, with his wife Teresa helping—though Ralph is usually around to help keep the mechanical stuff going.

Today, the Mountain Chalet stands as a testament to what’s increasingly becoming an anomaly in Aspen: the classic ski lodge. A rambling five floors with 59 rooms, including four apartments, across the five lots, it boasts one of the best locations in Aspen—right at the bottom of Aspen Mountain facing Wagner Park. On an exterior corner of the building, there is a painting of a couple dancing. And for the past several years, Rosemary Ranck has been painting flowers and vines on all the walls, giving the Mountain Chalet a European flair.

Breakfast is served to guests every morning. The two lobbies are relaxed, with big wood-burning fireplaces. There is always coffee. Every Monday, there’s a gluhwein après-ski party for guests.

“It’s been a wonderful 54 years with the lodge.” says Marian, who, along with Ralph, thinks they may be the oldest lodge in Aspen with original owners. “But it’s also wonderful having the kids take over,” says Ralph. Wonderful for the Melvilles, but even more so for Aspen.