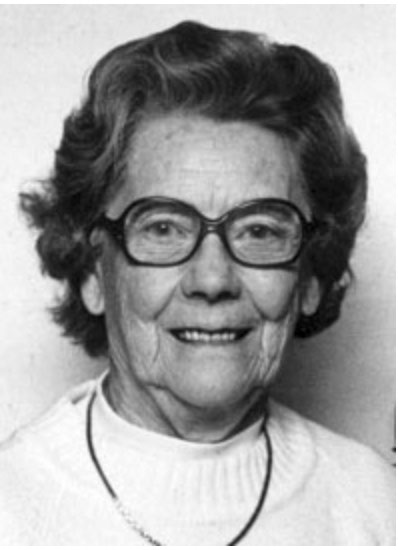 Mona Jenkinson Frost is well remembered in the community for her strong commitment to furthering culture during the Quiet Years in Aspen.  As a long serving teacher, church member, Pitkin County Library board member, Historic Preservation Committee board member, senior citizen advocate and beloved music teacher, Mona did all she could to promote education and culture in Aspen.

Mona was born in Aspen on Christmas Day 1905 to Frank and Eva (Shiman) Jenkinson who were originally from the Isle of Mann.  Frank came to Aspen with his brother during the mining era, returned to Isle of Mann to marry and then came back to Aspen.  Mona’s mother was an organ and piano player and her father had a fine tenor voice.  They filled the home with music and Mona learned from a young age to play both the organ and the piano.  There were three other children in the family, Mona’s older sister Pauline, and the younger twins, Earl and Lucille.

Mona was a serious student who worked hard to earn good grades.  After graduating from Aspen High School in 1923, she attended Western State College in Gunnison, CO and earned her teaching degree. She returned to Aspen to teach for one year before move to the eastern plains near Sterling to take a teaching position.  Mona had met Paul Frost, an Aspenite who worked for the State Highway Dept., while at home.  After some time of visiting while Mona was near Sterling, the couple married in 1935.

They had one child, Pauline, and Mona spent years at home to raise her.  The desire to teach brought her back to the class room and Mona taught for many more years.  Her students remember her as loving and demanding at the same time.  Mona taught 4th and 6th grades as well as serving as the music teacher for the school.  She also helped the school publish a humorous newspaper.  Mona passed away on March 5, 2002 at the age of 96.