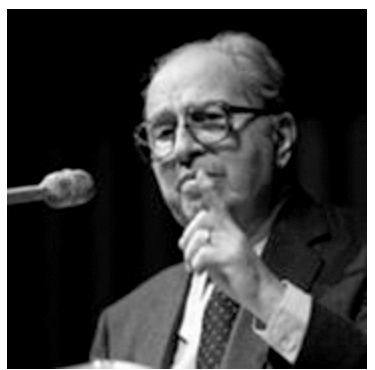 Mortimer Adler is an American professor, philosopher, and educational theorist. Born in 1902 in New York City, the son of an immigrant jewelry salesman, Adler dropped out of school at age 14 to become a copy boy for the New York Sun. He hoped to become a journalist and decided a few years later to take some classes at Columbia University to improve his writing. While there he became interested in philosophy after reading the works of English philosopher John Stuart Mill. Upon learning that Mill had read Plato at age five, Adler decided to broaden his philosophical knowledge.

He was so absorbed in his studies that he failed to fulfill the physical education requirement for graduation. However, Columbia soon awarded him an honorary doctorate because of the quality of his writings. Adler went on to become a psychology professor at Columbia, where he worked throughout the 1920s.

As a professor at Columbia, he wrote numerous books about Western philosophy and religion, as well as his own works of philosophy. In his philosophical works, he avoided academic-sounding language in order to make his thoughts accessible to all readers. This practice is consistent with his belief that “philosophy is everybody’s business.“ He has written more than 50 books over the course of his life.

In the 1930s Adler became a professor at the University of Chicago, where he advocated the adoption of the Classics as a main part of the curriculum. The faculty was reluctant to follow his ideas and reassigned Adler to the Law School. In later years, Adler helped to found the Institute for Philosophical Research at the University of North Carolina, the Aspen Institute, and the Center for the Study of the Great Ideas.

At his institutions, Adler focuses on making the study of Philosophy available to all people, not just specialists and the university-educated. At the Aspen Institute, for example, he teaches philosophy to business executives. He is currently a chairman of the Board of Editors at Encyclopedia Britannica and the director for the Institute for Philosophical Research in Chicago, as well as a senior associate at the Aspen Institute for Humanistic Studies.