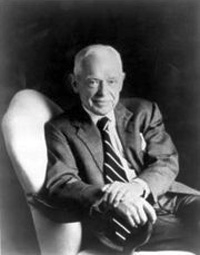 Nitze was born in Amherst, Massachusetts. His German ancestors came from the region of Magdeburg [Germany]. Paul Nitze’s father was a professor of Romance Linguistics who concluded his career at the University of Chicago. In his memoir, From Hiroshima to Glasnost, Paul Nitze describes how as a young boy he witnessed the outbreak of World War I while traveling in Germany with his father, mother, and sister, arriving in Munich just in time to be struck by the city crowds’ patriotic enthusiasm for the imminent conflict.

Nitze attended the Hotchkiss School and graduated from Harvard University in 1928 and entered the field of investment banking.

In 1928-1929 the Chicago brokerage firm of Bacon, Whipple and Company sent Nitze to Europe. Upon his return, he heard Clarence Dillon predict the depression and the decline of the importance of finance. Having attained financial independence through the sale to Revlon of his interest in a French laboratory producing pharmaceutical products in the U.S., Nitze took an intellectual sabbatical that included a year of graduate study at Harvard in sociology, philosophy, and constitutional and international law.

Nitze entered government service during World War II, serving first on the staff of James Forrestal when Forrestal became an administrative assistant to President Franklin Delano Roosevelt. In 1942, he was chief of the Metals and Minerals Branch of the Board of Economic Warfare, until he was named director, Foreign Procurement and Development Branch of the Foreign Economic Administration in 1943. From 1944 to 1946, Nitze served as director and then as Vice Chairman of the Strategic Bombing Survey for which President Harry S. Truman awarded him the Legion of Merit.

In the early post-war era, he served in the Truman Administration as Director of Policy Planning for the State Department (1950-1953). He was also the principal author in 1950 of a highly influential secret National Security Council document (NSC-68), which provided the strategic outline for increased U.S. expenditures to counter the perceived threat of Soviet armament.

From 1953 to 1961, Nitze served as president of the Foreign Service Educational Foundation while concurrently serving as an associate of the Washington Center of Foreign Policy Research and the School of Advanced International Studies (SAIS) of the Johns Hopkins University.

Nitze co-founded SAIS with Christian Herter in 1943 and the world-renowned graduate school, based in Washington, D.C., is currently named in his honor. His publications during this period include U.S. Foreign Policy: 1945-1955. In 1961 President Kennedy appointed Nitze Assistant Secretary of Defense for International Security Affairs and in 1963 he became the Secretary of the Navy, serving until 1967.

Following his term as Secretary of the Navy, he served as Deputy Secretary of Defense (1967-1969), as a member of the U.S. delegation to the Strategic Arms Limitation Talks (SALT) (1969-1973), and Assistant Secretary of Defense for International Affairs (1973-1976). Later, fearing Soviet rearmament, he opposed the ratification of SALT II (1979).

Paul Nitze was a co-founder of Team B, a 1970s intelligence think tank that challenged the National Intelligence Estimates provided by the CIA. The Team B reports became the intellectual foundation for the idea of “the window of vulnerability” and of the massive arms buildup that began toward the end of the Carter administration and accelerated under President Ronald Reagan. Team B came to the conclusion that the Soviets had developed new weapons of mass destruction and had aggressive strategies with regard to a potential nuclear war. Team B’s analysis of Soviet weapon systems was later proven to be largely exaggerated.

Nitze was President Ronald Reagan’s chief negotiator of the Intermediate-Range Nuclear Forces Treaty (1981-1984). In 1984, Nitze was named Special Advisor to the President and Secretary of State on Arms Control.

For more than forty years, Nitze was one of the chief architects of U.S. policy toward the Soviet Union. President Reagan awarded Nitze the Presidential Medal of Freedom in 1985 for his contributions to the freedom and security of the United States. In 1991, he was awarded the prestigious United States Military Academy’s Sylvanus Thayer Award for his commitment to the Academy’s ideals of “Duty, Honor, Country.”

Nitze’s brother-in-law Walter Paepcke founded the Aspen Institute and Aspen Skiing Company. Nitze continued to ski in Aspen until well into his 80s.