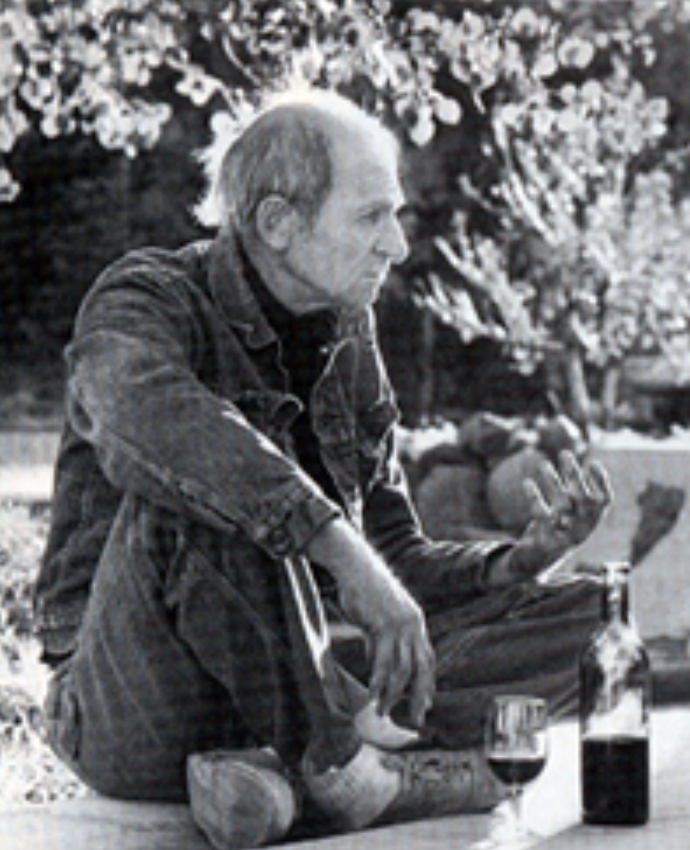 Paul Soldner was born in Summerfield, Illinois on April 24, 1921. Soldner hadn’t planned to be an artist when he was young; he started out as a pre-med student. His medical aspirations waned after being drafted into the Army and serving as a medic for three-and-a-half years during World War II. Afterwards, he returned to the United States with a strong interest in photography, and the desire to pursue a more artistic career. He turned to painting, and earned a bachelor’s degree in art at Bluffton College in Ohio, and then a master’s from the University of Colorado in Boulder.

It was at Boulder that he was introduced to ceramics by Katie Horseman, a visiting lecturer and head of ceramics at Edinburgh College of Art in Scotland. After teaching art for eight years in public schools, at the age of 33, Soldner decided to become a potter. He headed for the Los Angeles County Art Institute, and became Peter Voulkos’s first student, earning a M.F.A. in 1956.

At the Institute, Soldner helped set up the department with equipment and invented modifications to the pottery wheel, which began a lifelong interest in inventions and innovations which he introduced to the pottery world through “Soldner Pottery Equipment”. Paul was one of Voulkos’s few students who continued to make functional ceramics at the institute (Garth Clark, “A Century of Ceramics in the United States, 1878-1978), p. 330). Though he worked in a traditional form, his exploratory nature was involved in creating his monumental “floor pots,” which stood up to eight or nine feet in height, often with expressionistically painted areas on the forms.

In 1956, after graduation, Soldner was asked to stand in for the ceramics instructor at Scripps College in Claremont, California. He ended up staying on, and taught at Scripps and the Claremont Graduate School for the next thirty-seven years. Soldner remained an extremely active artist during his teaching years (to date he has had 178 solo exhibitions, 400 invitational exhibitions, and given over 400 lectures, seminars, demonstrations, and workshops), as well as creating and curating the annual Scripps Ceramics Invitational exhibition.

Paul Soldner has made numerous invaluable contributions to the field of ceramics, including developing what has been come to be known as “American Raku”, and a technique known as “low-temperature salt firing.” His involvement with raku, for which he is now internationally known, came by chance. As Garth Clark relates:

The traditional raku technique, which involves throwing and bisque-firing vessels which are then glazed and placed directly in an open raku kiln to be withdrawn a few minutes later and plunged into water, was adopted, transformed, and manipulated by Soldner as his major medium of expression, and as a result has gained widespread popularity in the ceramic art world. Though through Soldner raku has grown away from it’s Oriental traditions and become a strongly American art form, the form still requires the same depth and sensitivity to succeed. As Soldner states:

New issues and ideas have always been incorporated into Soldner’s work. His development of the low-temperature salt firing method for his raku pieces and his “pedestal pieces”—thrown and altered sculptural clay forms—push the limits of clay, revealing unique textures and forms. Soldner’s works have been exhibited in throughout all of the major cities of Europe and the United States, Canada, Latvia, Japan, Taiwan, Korea, and Australia.

Soldner is also the author of numerous articles and a book (Kilns and Their Construction), and the founder of the Anderson Ranch Arts Center in Snowmass Village, Colorado. The center was founded in 1968 and Soldner served as the director in the early 1970s. It is now well-known for its excellent summer program, drawing people from all over the world to study with well known teachers.