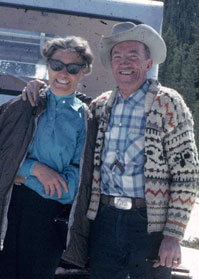 Peggy Rowland, one of Aspen’s last remaining ties to its mining heyday and a woman revered for her pleasant nature.

She was born in 1915, so she didn’t have direct knowledge of Aspen’s silver mining era in the 1880s and 1890s. But both sets of her grandparents were in Aspen from near its founding as a silver camp, so she heard lots of direct accounts about the old days.

Her maternal grandfather was Al S. Lamb, who came to Aspen in its infancy in 1880 and established a drug store on Hyman Avenue, according to an interview with Peggy in the book, Aspen: The Quiet Years. Her grandfather grubstaked miners during the boom and continued to operate the store well after the bust of 1893.

Her grandparents on her dad’s side of the family also came to Aspen in the 1880s. Her dad, Ed Cooper, had a bookstore in the Wheeler Block building. Peggy was born in Aspen but her family moved to Denver in 1919 because her dad couldn’t make a living with his store in the dying town.

Peggy returned every summer to hang out with her grandparents and ride horses. She recalled in The Quiet Years that her grandpa operated a barter system at his store. He traded goods for everything from eggs to horses for use when Peggy visited.

Harold “Red” Rowland was the son of a miner and grew up in Aspen working on and off for the Midnight Mine. He also worked on a water diversion tunnel near Aspen and did occasional work on ranches in the valley before leaving town in 1939 for more consistent work in Denver.

During Ruth’s summer visits to Aspen, she met Red and they married in 1939. Their hearts belonged to Aspen, however, and they returned in 1946. Red started working for the Aspen Skiing Corp where he had a hand in the construction of nearly all of the original chairlifts on Aspen Mountain. He eventually became vice president of construction for the company. Red retired in 1977 and passed away in 1987.

Friends recalled Peggy as a woman who loved the outdoors, an excellent gardener and an enjoyable person to be around.

Peggy didn’t take up skiing until she was in her 40s, but she was hooked and skied regularly into the mid-1980s.

She was also an avid equestrian. She and Red regularly took pack trips to various parts of the backcountry around Aspen. A friend kidded Peggy about her and Red being Aspen’s original hippies because they rode their horses up to their wedding at Maroon Lake in 1939.

Peggy had a life-long interest in education. She earned her degree in home economics from Colorado State University. After she raised her four kids in Aspen, she taught school and was the Pitkin County superintendent of schools for several years. She was also active in the Episcopal Church and helped form it in Aspen.

Peggy also was a longtime member of the Philanthropical Education Organization, one of Aspen’s most enduring, if somewhat obscure organizations. The Aspen chapter was chartered in 1917 with Peggy’s mother one of the first members, according to a 1975 article in The Aspen Times by Mary Eshbaugh Hayes. She remained active in the philanthropic organization until recent years, Zanin said.

Peggy also kept in touch with friends through a bridge club. The members would take turns hosting one another at their homes, and Peggy dazzled other members with her flower garden.

“She loved her garden,” St. Andre said. “She kept at it ” down on her knees weeding ” into her 80s.” She and Red moved roughly 30 years ago to Shady Lane from the house at Francis and First that had been in the Rowland family since about 1900.

St. Andre said her mom didn’t consider leaving Aspen after Red died and despite all the changes she witnessed.

“We have the nicest place in Aspen,” St. Andre said. “Her roots were here. Why would you want to leave Aspen?”

She recalled that her father always said, “I’d rather be a fire hydrant in Aspen than a millionaire anywhere else.” She believes her mom subscribed to that theory as well.

Excerpted from The Aspen Times and Living it Up in Aspen: Post-war America, Ski Town Culture, and the New Western Dream, 1945-1975 by Edward Duke Richey   —Photos: Aspen Historical Society