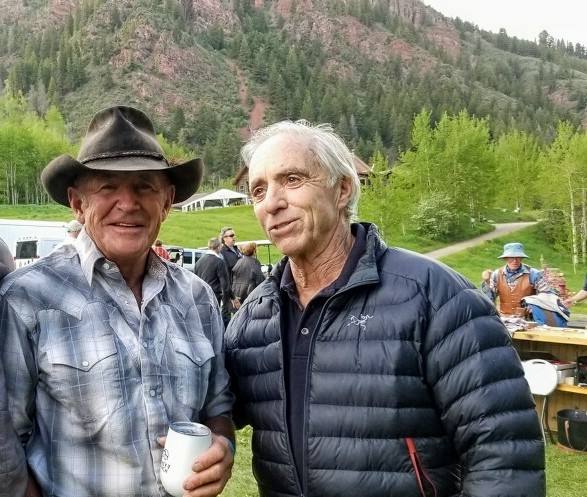 Rick was born in Aspen, Colo. and educated in the local school system. Outside of the classroom and while living on the T Lazy 7 ranch with his two brothers, there was always plenty to do. Rick had a passion for racing motorcycles at an early age. He raced for Triumph for nine years, riding mostly left hand ovals on race tracks at local fairs. At one point, he was 35th in the world. Deane broke the world record for racing motorcycles at the Pikes Peak Hill Climb in 1973. He did it again in 1975 and followed that up with another victory in 1976. That record stood for 13 years and until the road was paved; technically he still has the record for a dirt road. But when Rick was faced with the choice of living in California and continuing to race, or moving back to the mountains, he returned to Aspen.

Around this time, Rick played Rugby for the Gentlemen of Aspen Rugby team for about 10 years, during which time, in 1977, he traveled to London with the Gentlemen.

Living at the ranch, located on Maroon Creek Road on the way to Maroon Bells, his career of rescuing people began early. T Lazy 7 was the first phone coming down from the Bells and out of the Maroon Creek wilderness. It was common for people, such as distressed hunters and hikers, to stop and request assistance and/or aid. From there, the phone tree would begin with calls placed to locals including Ralph Melville and Fred Braun. The rescue equipment was heavier then and required that horses were used and loaded up with gear. Rick recalls the first helicopter rescue was in 1966 when three persons fell and two were killed on the deadly Bells.

Rick has worked many rescues on many mountains. He remembers one rescue on Mount Sopris that involved a Vail Snow Ranger and an associate. Deane found their snow cave but because of blizzard conditions, they were not able to make the trek out of the cave for two days. Of the many lessons learned from that incident was the following: Many people see clear skies in Carbondale, but do not realize that a storm can move across towering Sopris, quickly and harshly.

While Rick and his family were involved in many rescues, Mountain Rescue, which was incorporated in 1965, was also doing valuable work. He formally joined Mountain Rescue in 1978, served as its vice
president at one point and remains its longest active member, serving the community for over 41 years. He has seen many advantages as technology has advanced. The helicopters and locator beacons make rescues much faster. With the use of cell phones, rescuers can walk people back to safety using their coordinates and a map.

Rick Deane received the National Association for Search and Rescue Valor Award in 1990. He also received the 1996 Greg Mace Award, and the 2007 Aspen Elks Lodge Distinguished Citizen of the Year Award. He has been a member of the Elks Club for 53 years.

David Swersky Following a degree in Biology from Lehigh University and a degree in Dental Medicine from University of Pennsylvania, David Swersky served in the Navy aboard the USS Enterprise. There his main jobs were providing dental care to the sailors and running a battle dressing station. Little did he know at the time that his training in mass casualty care and triage would become a major factor in his Aspen life.

Shortly after arriving in Aspen in 1970, for what was to be one winter of skiing, David was made aware of a need for a volunteer science teacher at the newly formed alternative Community School, then located in the Physics Institute. He readily took that position and thereby started a pattern of volunteerism.

However, the thing that David said most enhanced his life in Aspen was, in 1980, joining Mountain Rescue Aspen at the urging of Richard Arnold. With his love of the backcountry, both summer and winter; and his military medical training, it was a perfect fit. He became one of the first group of Rescue Leaders under the tutelage of his friend Greg Mace and learned to organize and execute missions. When Greg tragically passed away, David realized that a lot of people would have to step up to fill that void. He served on the board and became president in the late 1980’s.

Among his pet projects in MRA were teaching swift water rescue and being one of the founders and instructors of the Annual Avalanche Awareness Workshop, now in its 35 th year. Although his role in MRA has changed over the decades, David is still an active rescue leader. What is most important to him is the comradery and trust the MRA family displays.

A while ago, an MRA friend invited David to help with the ropes course for Aspen Youth Experience which brought inner city kids to Aspen for mountaineering challenges; then used that experience as a metaphor for confronting their life challenges back home. He later was invited to join the Board. One day, at the base camp in Marble, a life enhancing event happened. David met his future wife, Geni King. Geni and her boys had been a host family for some of the AYE kids. Shortly thereafter, they joyfully blended their families of two girls, Alia and Toni, and two boys, Jonathan and Alex. They continued to host the kids until the program ended.

David loves the ski huts. He has been on the Board of the Fred Braun Hut System for about 20 years. During this time, the original 6 huts have been upgraded and the spectacular Opa’s Hut has been built.

David learned to be a silversmith in 1971 in a CMC class taught by master craftsman, Sandy Sanderson and soon taught the CMC class following Sandy’s passing. Then in 1973, he “hung his shingle” for the practice of dentistry. Several Aspen families are still patients that now span three generations, and some employees have lasted through the decades. The office motto has been “Nobody cares how much you know, until they know how much you care.” But David is often chided for his corny jokes and that the patients are not always in the best position to laugh.

“I love small town living. I value the close friendships we develop here; walking into a restaurant in the offseason and knowing almost everyone; doing countless pro bono consultations on the Mall. The almost 50 years in the Roaring Fork Valley has been an incredible gift for me and my family and I am most thankful each and every day.”