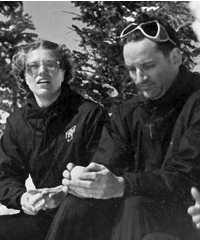 Originally from Chicago, Stanton and her husband, Edgar, were among the first visitors who came to Aspen for skiing. They vacationed here first as guests of Walter Paepcke in 1946 and returned in 1953 as full-time residents.

The Stantons’ daughter, Roddy, said her parents told her Walter Paepcke begged them not to visit Aspen in 1946 because the ski area was not developed enough. But they borrowed the key to his house, hopped on a train and arrived in Aspen in a snowstorm.

“The next morning my mother stood on the stoop in the sun and looked at the mountain, and she knew she was looking at the rest of her life, for my father it took a little longer, like maybe 10 minutes.

Rose was a guiding force behind Aspen Valley Hospital and forming the hospital district, and Edgar for helping to form the Aspen Music Festival and School. Rose was on the hospital board for more than 20 years.

“She was a wonderful woman—very instrumental in building and designing and finishing up Aspen Valley Hospital,” said Eve Homeyer, former Aspen mayor who was the first chair of the Aspen Valley Medical Foundation and 1992 AHOF inductee. “She did wonderful work in the hospital making it a beautiful place, so it didn’t look like just any other hospital. It had color, and it was cheerful.”

Before then, the former hospital in Aspen sat at the foot of Red Mountain, and was a crowded facility in need of many improvements.

“She was very generous. She gave to everybody, and she was very well-liked,” said close friend and 1993 AHOF inductee Jeanne Jaffee. “Rose was very important at the hospital.”