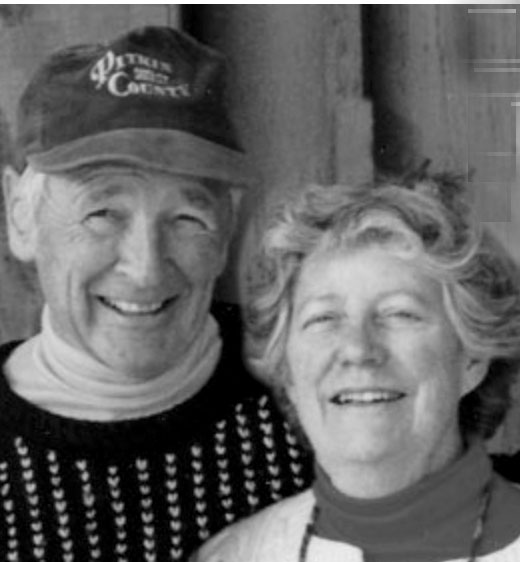 Bob was born in Detroit, MI in 1923, the same year Carolyn “Tee” was born in New York City. Bob grew up near Chicago, and Tee spent her school days in Andover, MA and Palo Alto, CA. They both migrated to the mountains for college, meeting at the University of Colorado. During the War years, they lived in Palo Alto and moved to Denver in 1946 where Bob worked in accounting for Continental Airlines. Bob eventually left the airline and started looking for mountain property where he and Tee could raise their family of six kids.

In 1961, the family moved to the Roaring Fork Valley after finding a remote working ranch near the end of Capitol Creek Road. Bob envisioned an idyllic life with his family growing up in the shadow of Haystack Mountain. He told a newspaper reporter that he moved to the Roaring Fork Valley to raise children first and he would learn to raise cattle as he went. The Child family initially lived in an old log cabin with electricity and telephone, but no running water, while their home was being built.

Bob and Tee were thrust into the world of politics by accident when they decided to fight a proposed ski area on the adjacent Haystack Mountain that the Aspen Skiing Company and Forest Service were studying. Bob supported more wilderness, and he did not want to sell his ranch. With the final hearing only months away, Bob used his family’s connections to encourage letters be sent to the U.S. Forest Service opposing the proposed ski area. The permit was ultimately denied and Haystack Mountain became part of the Maroon Bells-Snowmass Wilderness.

Bob was urged by local wilderness advocates to run for County Commissioner to fight for local environmental issues. He served from 1978 to 1988 and 1993 to 1995, and is well known for his support of land use policies that maintained low-density development and preserved open space corridors. His proudest moment as a Commissioner was his work on the Colorado River Commission, including a trip to Washington D.C. with John Denver to lobby the Department of the Interior to block a reservoir and to restore water rights to the Southern Ute Indian Tribe. For that effort, he was made an honorary member of the tribe, and received a Creative Initiative in the Cause of the Environment award from the U.N. Environment Programme.

Bob was instrumental in creating CORE and was its first board representative. He was a founding member and active participant of the Snowmass-Capitol Creek Caucus, was involved in the establishment of and served on the board of Pitkin County Open Space and on the Pitkin County Planning and Zoning Commission. He also served on the boards of Aspen Valley Hospital, the Windstar Foundation, Colorado River Water Conservation District, the Western Slope Water Advisory Council, the Northwest Colorado Council of Governments, the Governors Water Roundtable and Colorado Counties, Inc.

Tee was not only Bob’s partner in environmental work, but also worked for many years as a typesetter and proofreader for the Aspen Times and for the Rocky Mountain Institute where she also served on the first Board of Directors. She helped found the Basalt Library and volunteered as a “Blue Lady” at Aspen Valley Hospital and as a Basalt Girl Scout leader. She was a member of the Basalt Band Mothers, the Basalt Literary Sorosis Club and the Basalt Homemaker’s Club.

Bob and Tee were married for 57 years. Before their deaths, Bob and Tee ensured that the Child Ranch would retain its wilderness characteristics in perpetuity by starting the process of placing a Conservation Easement on the property. The ranch was one of the first large blocks of land preserved for green space in Pitkin County. In 2004, they posthumously received the “Landowner of the Year” award from the Colorado Division of Wildlife.