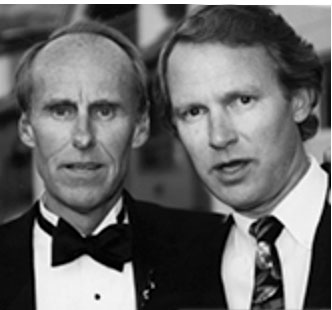 Brothers Tom and Gregg Anderson grew up in Minnesota and experienced Aspen on regular family vacations starting in 1954. That “something special“ about Aspen drew the brothers back as adults. Tom came first in 1971 and Gregg followed in 1972. Upon arriving in Aspen, each brother made their mark on Aspen, though in very different ways.

Tom married in 1960. He and Janny honeymooned in Aspen and later built a vacation home here in 1965, relocating permanently in 1971. Shortly thereafter the couple began volunteering at the Aspen Valley Ski Club, and Tom spent hours coordinating the Aspen Cup race program. He served on the Ski Club board and as president for the 1976-1977 season. His contributions earned him a place in the AVSC Hall of Fame in 2013 and he was honored as Aspen’s Wintersköl King the same year.

He volunteered for 20 World Cup races and became Chief of Race, no small feat considering the World Cup is considered the premier competition for alpine ski racing.

He opened a children’s sports store in Aspen called P’Nuts, then, in 1980, purchased Pomeroy Sports which he operated until his retirement in 2013. He served on the boards of both the Aspen Music Festival and School and Aspen Valley Hospital. Tom passed away at the age of 78 in October, shortly after he learned of this impending induction.

Rev. Gregg Anderson’s spiritual vocation started early. He received a B.A. from St. Olaf College in 1970, followed by an M.A., an M.Div. and a D.Min. He arrived in Aspen in 1972, planning to work for the summer while completing applications for law school. But instead he contacted Helen Klanderud about a counseling job at Touchstone. Helen told him Touchstone was fading. Gregg, Helen and Charley Baker started Open Door in 1972 and he continued as a counselor through 1978. Open Door became Aspen Counseling Center and more recently MindSprings Health.

A former Big Brother/Big Sister volunteer, Gregg soon started Aspen Big Brothers Big Sisters, a program matching youth and adult mentor pairs in 1974. Now known as The Buddy Program, it serves over 1000 youth and families each year in the valley, adding case management, counseling, and scholarships to its services.

Gregg served as assistant minister at the Aspen Community Methodist Church for six years, then, for 35 years until his retirement in 2013, was the director and chaplain at the Aspen Chapel, and was instrumental in starting the Snowmass Chapel.

Gregg received thousands of locals, part-time residents and visitors to the Chapel. Gregg’s non-denominational approach created a spiritual home for all of Aspen. He has performed nearly 2,000 weddings, 300 baptisms, and 400 memorials. In 2015, Gregg married Carolyn Ethridge.