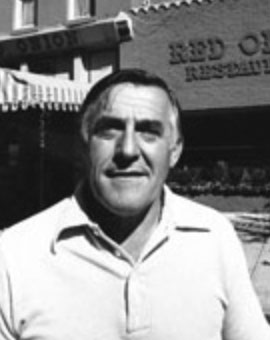 Werner Kuster was the long-time owner of the famous Red Onion Restaurant and Bar. The name, according to a brief history written by Ellen Walbert for the back of The Red Onion menu, meant “something out of the ordinary, unusual, odd, ‘a white elephant,’ something the likes of which could be found nowhere else on earth.

“In 1946, as Aspen began to awaken as an international ski resort, 10th Mountain Division veteran Johnny Litchfield bought and remodeled the old saloon, reopening on Jan. 8, 1947, and made the nickname official. Six years later the saloon was bought by Kuster and Arnold Senn.

Kuster, a Swiss chef, had been dividing his professional time between the Onion, where he leased the kitchen in a profit-sharing arrangement with then-owner John Sihler, and the Hotel Jerome under head chef Senn. When word got out that Sihler wanted to sell, Kuster and Senn jumped to buy it for $21,000. Senn stayed on at the Jerome, but Kuster ran the Onion under Senn’s watchful mentorship.

The Red Onion, with its elegant dining room on the east side, nightclub with stage on the west, and the core bar and booths in the middle, quickly became the hottest spot in Aspen.

The list of performers on that stage is legendary, from internationally acclaimed blues singer Billie Holliday to local jazz favorite Freddie Fisher on saxophone, and many photos from those days still grace the walls, after being discovered in a box in the basement by Ellen Walbert.

Longtime chef Kurt Wigger recalled that the late singer John Denver sang his breakout hit, “Country Roads,” for the first time one night at The Red Onion in the early 1970s. Aside from the musical variety and excellence, the stories feature regular patrons doing wacky things and have soaked into the walls of the bar and the collective consciousness of town.